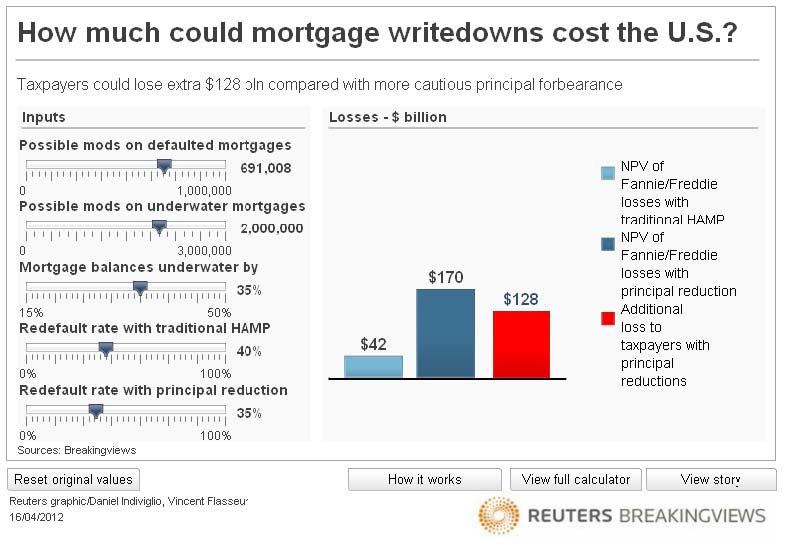 The holy grail of foreclosure prevention looks near struggling homeowners’ grasp – but its contents may taste bitter to taxpayers. The Federal Housing Finance Agency appears close to caving on letting Fannie Mae and Freddie Mac cut mortgage balances for underwater borrowers. A new Breakingviews calculator shows that this policy shift would not cost too much more at the margins. But it introduces another layer of moral hazard: if it encourages enough borrowers to sip from the cup, Frannie’s already gargantuan $150 billion bailout tab could almost double.

Plug those numbers into Breakingviews’ calculator, along with Barclays’ assumption that redefaults may hit 40 percent, and it shows that principal forgiveness costs $9 billion more than the projected cost of Treasury’s original Home Affordable Modification Program. That initiative shrinks a borrower’s monthly payment without reducing balances. Forgiveness is more expensive – while it usually pushes redefault rates down by five to 10 percentage points, according to Barclays, it cuts mortgage principal and interest revenue.

Frannie would, though, get a boost from the Obama administration, which has offered to use leftover bailout money to pay an incentive of up to 63 cents for each dollar of principal cut. The firms say that makes reducing loan balances $1.7 billion cheaper than traditional HAMP modification. That’s bogus math for taxpayers, of course – they provide the funds either way.

The real problems start if borrowers who are deeply underwater but still paying their mortgage demand principal relief. Some 2 million homeowners fall into this category, the FHFA says. Factoring those in and assuming none of them defaults, the calculator shows that slashing loan amounts would cost taxpayers a whopping $128 billion more than just rejigging payments.

No wonder the spillover effect has DeMarco worried. Unless such a program managed to remain highly targeted, taxpayers would be facing too much of a risk.

Fannie Mae and Freddie Mac’s regulator is in the process of reviewing its stance prohibiting mortgage principal forgiveness. Federal Housing Finance Agency Acting Director Edward DeMarco indicated that such a policy shift was possible on April 10, citing a study conducted by the agencies that shows their losses would decline by $1.7 billion if mortgage balances are cut for select defaulted borrowers. This new analysis takes into account new Treasury incentives that would provide Fannie and Freddie up to 63 cents on the dollar for principal reductions.