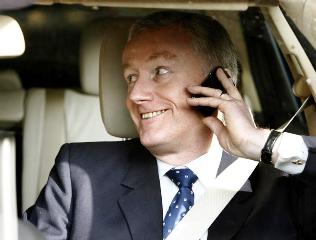 It’s not just bankers’ bonuses that are subject to clawback. By stripping Fred Goodwin of his knighthood, the British government has elevated banker-bashing to a new level. But further humiliation for the already-disgraced former Royal Bank of Scotland chief executive may stoke, not sate, anger against financiers. Besides, the move devalues one of the few non-financial rewards that might motivate future bank chiefs.

It’s hard to feel sorry for Goodwin. Domineering and vainglorious, he led RBS on an acquisition spree of colossal recklessness, triggering a 50 billion pound bailout when the crisis struck in 2008. The UK economy will suffer the consequences for years. But extensive investigations have concluded Goodwin was incompetent, not a criminal.

Unconvicted, he is collecting an annual pension which, even though reduced, is still worth more than 300,000 pounds a year. In the absence of sterner censure, stripping Goodwin of his knighthood – a punishment previously reserved for frauds, traitors and murderous dictators – may look an appropriate sacrifice.

It’s not the first time Goodwin has been used as a political decoy. In early 2009, the previous Labour government successfully used the furore over Goodwin’s pension to distract attention from the asset protection scheme which put taxpayers on the hook for potential losses on 280 billion pounds of RBS’s risky loans.

But if the latest exercise was designed to divert the focus from current RBS CEO Stephen Hester – the man brought in to clean up Goodwin’s mess – it failed. Two days before Goodwin was de-knighted, Hester bowed to political pressure and relinquished his near 1 million pound bonus. Far from defusing bankers’ pay as a political issue, the latest decision may give it further fuel.

Moreover, removing Goodwin’s knighthood undermines the value of such titles. Britain’s elaborate honours system is a cheap and surprisingly effective way for the government to encourage good behaviour among its corporate chieftains. For many British executives, securing a knighthood trumps almost any financial reward. The government could have used the promise of a future title to compensate for Hester’s lost bonus. Now he, and others, will look at Goodwin’s fate and wonder if a knighthood that can be annulled on a whim is really worth so much.

The knighthood conferred on Fred Goodwin, the former chief executive of Royal Bank of Scotland, was cancelled and annulled on Jan. 31.

An announcement from the Cabinet Office said the title, awarded in 2004 for services to banking, was withdrawn on the advice of the Forfeiture Committee, which stated that “Fred Goodwin had brought the honours system into disrepute”.

“The scale and severity of the impact of his actions as CEO of RBS made this an exceptional case,” it added.

Others who have had titles withdrawn include former Cambridge spy Anthony Blunt, former Romanian dictator Nicolae Ceausescu, and Robert Mugabe, president of Zimbabwe.