Down and out in Paris 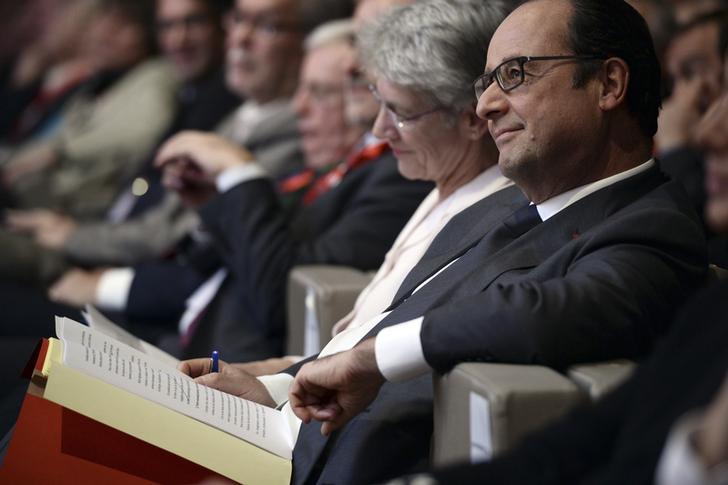 Finally some felicitous news about the French labour market. The jobless total in the euro zone’s second-biggest economy fell by 23,800 in September, its biggest drop in nearly eight years barring a data glitch-related fall in 2013. Unfortunately, with the number of unemployed people still very close to a record, it only underscores the lose-lose quandary in which President Francois Hollande finds himself.

The president has said he won’t stand for a second term if unemployment isn’t falling. He felt the heat when joblessness was rising. But shorter dole queues won’t stop voters punishing his Socialist party in December’s regional elections as they have in every ballot since he took office in 2012.

First, 624,600 more people are out of work now than when Hollande became president. This means the jobless total would have to fall at September’s unusually rapid pace for more than 26 months to wipe out the increase in unemployment seen so far on his watch. This is unlikely.

Granted, Hollande had the misfortune to take office when the euro zone debt crisis was in full swing. But the weakness of the French economy has been surprising given the country escaped the serious debt and banking crises which brought other countries to their knees, as the European Central Bank’s chief economist, Peter Praet, pointed out in an AFP interview published on Oct. 27.

For Praet, the answer is the sort of reforms espoused by the government. But these changes are also at the root of Hollande’s electoral problem. Traditional Socialist voters are disenchanted with the centre-left government’s efforts to push through reforms they associate with a centre-right agenda. And economic reforms are also breeding insecurity, which is helping the anti-immigrant, anti-euro National Front.

In December, the far-right National Front is likely to take control of one and possibly two of the 13 regions in mainland France, with the centre-right Les Republicains expected to win a majority of the rest, according to a recent poll. Few governments can ignore this sort of mid-term electoral drubbing. Hollande may have to choose between his legacy as a reformer, or getting a shot at a second term.

The number of people registered as out of work in mainland France fell by 23,800 in September to 3,547,800, down 0.7 percent from a record level seen one month earlier but up 3.1 percent from a year earlier, Labour Ministry data showed on Oct. 26.

The centre-right Les Republicains party led by former president Nicolas Sarkozy is expected to win a majority of regions, according to an Oct. 23 survey by the BVA polling institute, which was the first to measure voting intentions across mainland France ahead of elections set for Dec. 6-13. The poll showed the ruling Socialists who currently dominate the regional assemblies winning just three regions.