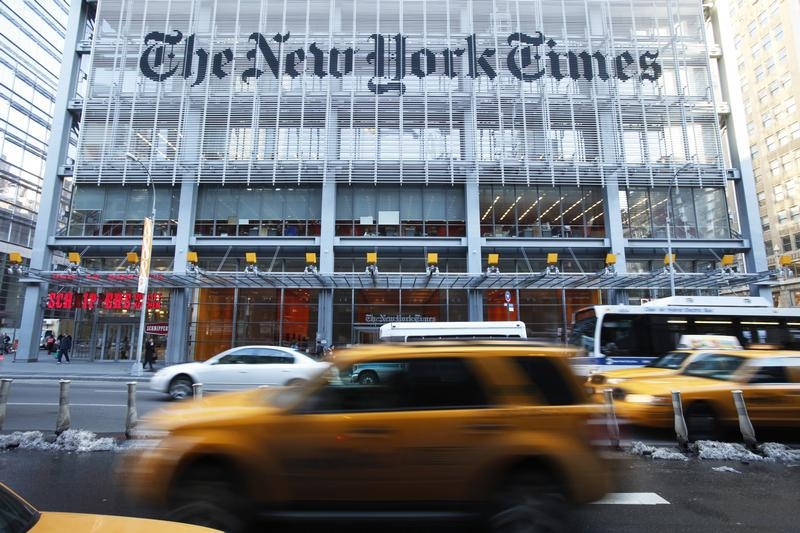 The sale of the Financial Times is a sign for the Times – the New York Times, that is. Media tongues are wagging about the $1.3 billion Japan’s Nikkei agreed last Thursday to pay Pearson for the pink newspaper. The deal, at 35 times the FT’s operating profit, makes it worth wondering what’s next.

The New York Times has to be near the top of the list. The Ochs-Sulzberger family, which has controlled the Gray Lady for more than a century, may not get a better chance to secure top dollar for the prestigious title.

The business has been streamlined in recent years and is in improved health, too. In 2009, it was so laden with debt that it had to turn to Mexican billionaire Carlos Slim for an onerous $250 million loan, since repaid – though Slim now owns 17 percent of the company’s stock. The Times has reduced its total borrowings, and it restarted dividends in 2013.

Dozens of Ochs-Sulzbergers control the $2.2 billion New York Times Co through a trust that holds private Class B shares carrying the right to elect around two-thirds of the directors on the board. Meanwhile the economic stake held by the trust and family members, including publicly traded Class A shares, has shrunk to 11 percent according to this year’s proxy statement, down from 19 percent five years ago.

Chairman Arthur Sulzberger has said the company is not for sale. Yet money may eventually prove persuasive, as it was for the Bancroft family, which sold Dow Jones – publisher of the Wall Street Journal – to Rupert Murdoch’s News Corp in 2007. Murdoch paid $5.6 billion, or around 40 times estimated earnings for the year, a 65 percent premium to the undisturbed market price at the time. The price valued the Dow Jones enterprise at around 16 times EBITDA.

In another example, Amazon Chief Executive Jeff Bezos paid the Graham family 17 times estimated EBITDA for the Washington Post, which he bought for $250 million in 2013.

Analysts peg the New York Times’ EBITDA at $255 million this year and it has $235 million of net cash, according to Thomson Reuters. The Murdoch and Bezos multiples suggest an equity value north of $4 billion. That’s a huge premium, and an FT-like valuation could imply an even higher price. No wonder if some of the owners of the Gray Lady are feeling green with envy.

Pearson on July 23 agreed to sell the Financial Times to Nikkei for $1.3 billion. Nikkei paid 35 times the FT’s 2014 operating profit of $37 million.

Other notable newspaper deals in the past decade include the sale of the Washington Post to Amazon CEO Jeff Bezos for $250 million in 2013 and Rupert Murdoch’s takeover of the Wall Street Journal for $5.6 billion in 2007.

The New York Times, which will report second-quarter results on Aug. 6, is controlled by the Sulzberger family and chaired by Arthur Sulzberger, who also holds the title of publisher.