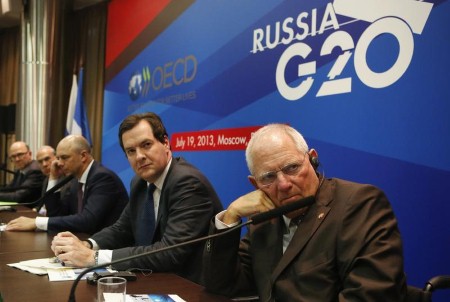 The G20 is adept at creating the illusion of movement. Ever since it acquired some relevance in the wake of the global financial crisis, the club of the world’s largest economies hasn’t shied away from bold statements on the need for international cooperation or regulation to achieve financial peace and happiness. This year, the group’s finance ministers are mad as hell about tax evasion by multinational corporations. They really can’t take it anymore.

That may fit with the global mood, but it will take years for member countries to translate virtuous indignation into concrete, legal deeds. And if they wanted their intentions to sound credible, Moscow wasn’t the best place to launch a global push for tax fairness.

To be fair, the G20’s adoption of the “action plan” drafted for them by the Organisation for Economic Cooperation and Development (OECD) isn’t insignificant. It falls short of the grand international agreement with watertight rules that campaigners advocate, but it does provide some limited and realistic goals. It notably aims at the problem of conflicting tax systems, which allow companies to benefit from de facto “double no-taxation”. It recognises the complexities of pinning down profits in the digital economy. And it tries to find a way to “align tax with substance” – i.e. to make countries pay tax where their real economic activity is located.

The piecemeal approach is sensible, but the G20 agreement is a diplomatic feat, not a legal one. Divergences remain between developed and emerging economies. Contradictions abound within Europe, where the single market allows for tax competition, not all of it fair – tax evasion is always other people.

The “base erosion and profit shifting” the OECD wants to fight against will not disappear until governments pass stringent laws to prevent it. Companies, meanwhile, may come to realise that a level international playing field is better than a system that leaves them exposed to popular anger and government wrath.

Finance ministers from the group of 20 richest nations endorsed on July 20 an OECD draft plan to fight corporate tax avoidance and evasion at the international level.

Finance ministers from the group of 20 richest nations endorsed on July 20 an OECD draft plan to fight corporate tax avoidance and evasion at the international level.