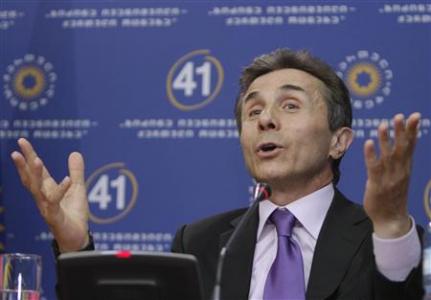 The Georgian Dream opposition won the parliamentary election. That’s a normal pendulum-swing rejection of the government, in spite of its fine economic performance. But the Dream’s leader is a shadowy billionaire with unsettling good relations with the big boss from the North.

Georgian presidential candidate Bidzina Ivanishvili speaks during a news conference at his office in Tbilisi, October 2, 2012.

According to preliminary results the Georgian Dream opposition coalition of six parties led by Bidzina Ivanishvili won a majority in legislative elections Oct. 1. President Mikheil Saakashvili, leader of the outgoing United National Movement government, has conceded defeat. A presidential election is scheduled for October 2013 and Saakashvili is ineligible to run again under the current constitution.
Ivanishvili is estimated by Forbes in March 2012 to have a net worth of $6.3 billion. His fortune appears to have been derived primarily from Russian privatizations and other activities in Russia’s metals, banking, telecom, hotels and drugstore chain sectors - his largest holding is Rossiyisky Kredit, established in 1990.
According World Bank data, Georgia’s GDP in 2011 was $14.4 billion at market exchange rates, or $5,500 per capita at purchasing power parity. After a 3.8 percent decline in 2009, real GDP grew by 6.3 percent in 2010 and 7.0 percent in 2011, and is expected by the International Monetary Fund to grow by 6 percent in 2012. Inflation in 2011 was 8.5 percent, the current account deficit was 12 percent of GDP and foreign direct investment was $970 million, 7 percent of GDP. Public spending in 2011 was 39 percent of GDP, according to the Heritage Foundation.
Georgia ranks 64th on Transparency International’s Corruption Perceptions Index, 34th on the Heritage Foundation’s Index of Economic Freedom and 16th on the World Bank’s Ease of Doing Business Index.