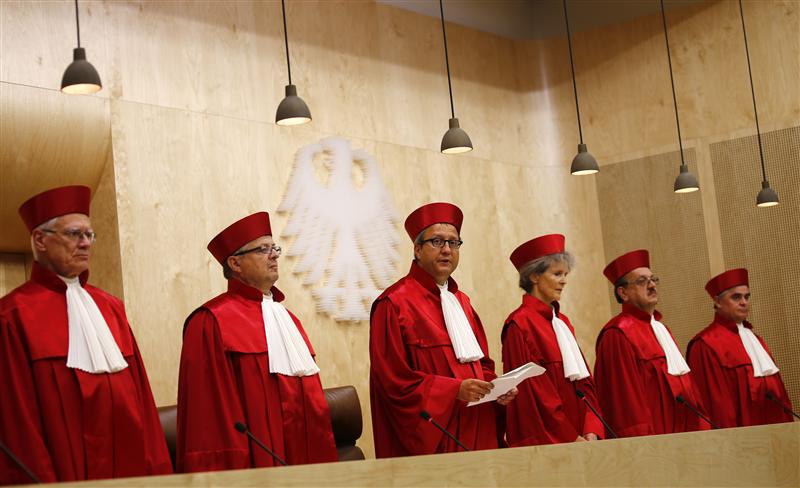 The German constitutional court’s hearing on the European Central Bank’s bond-buying programme will be another opportunity to show how fragile the basic agreement at the heart of the monetary union really is. The judges in Karlsruhe are being asked to say whether Berlin is at risk of agreeing to an ECB policy that violates the conditions they had previously set on the monetary union. Should they make the programme known as outright monetary transactions (OMT) verboten, the euro crisis might be reignited. That looks unlikely, although a negative verdict cannot be ruled out.

Technically, the court in Karlsruhe has no jurisprudence over European institutions. But it may rule that Berlin shouldn’t agree to such a policy. Germany’s constitution stipulates that monetary policy can only be transferred to an independent body committed to guarantee price stability.

Materially, the whole case boils down to a single question. Does the ECB’s pledge to buy government debt mean monetising public debt? If the answer is yes, this would be against the bank’s mandate, as the judges pointed out earlier.

The ECB replies that OMT – which is yet to be used – is crucial in fulfilling its task, because distortions of the bond market were hindering its ability to conduct monetary policy.

Judges may have to go deep into what is a furious debate for economists and central bankers themselves. Witness the diverging opinions of the two Germans who are sitting on the ECB’s governing council, Joerg Asmussen and Bundesbank President Jens Weidmann.

Given the court’s pragmatic track record on similar European matters, it is hard to imagine it could go as far as demanding that Germany leave the euro zone. The judges are more likely to give a qualified go-ahead to OMT, and set conditions that would try to limit its scope. Even this would be dangerous, though. The OMT’s success hinges on the fact that it is potentially unlimited.

Even a suggestion that the ECB’s policy violates the constitution would be politically toxic in Germany. Angela Merkel has tacitly supported the policy, but the trust in the common currency wobbles and an anti-euro party tries to woo voters. Hopefully, the judges will postpone their decision until after the German elections – and then have the common sense to put monetary policy back where it belongs: the realm of central bankers.

Starting on June 11, the German constitutional court in Karlsruhe will hold a two-day public hearing focusing on the European Stability Mechanism and the policies of the European Central Bank.
Among others, Bundesbank President Jens Weidmann and ECB executive board member Joerg Asmussen will give testimony as expert witnesses. A verdict is not expected this week but within the coming three months.
In September 2012, the court issued an interim injunction giving a qualified approval to the ESM treaty.