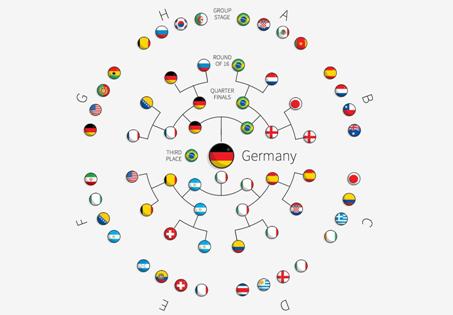 Germany is going to win the soccer World Cup. The football-mad Brazilian hosts have won five times, more than any other country. But using a Breakingviews calculator (updated June 2014) based on the hard numbers – the players’ transfer value, population, participation and public engagement – Teutonic power will squash the romantic dream of a sixth win for Brazil.

There are 32 national sides in the quadrennial tournament. Spain has the most valuable squad of players, worth $720 million according to data collator transfermarkt.co.uk. The United States has the most people to choose from, more than 300 million in total. Little Bosnia Herzegovina has the most avid supporters, if television viewership from the last tournament in 2010 is a guide.

Germany, however, has all-round strength. It is top of the heap when it comes to participation in soccer. Figures from FIFA, the sport’s governing body, suggest 36 percent of German men play the game. It also has the sixth most valuable squad of players, worth a total of about $550 million, the sixth most engaged supporters and the seventh-largest population among the nations travelling to Brazil, with 82 million people.

That means that across the four criteria, Germany tops the list with Brazil second. Italy and Spain, also previous winners, come in third and fourth. England and Argentina will make it to the quarter-finals if Breakingviews’ soccernomics ranking holds up. Chile, France and Japan will punch above their weight, compared to FIFA’s current assessment of form.

There is, of course, more to the so-called beautiful game than socio-economic underpinnings. The hosts could suffer from the tournament draw, held in early December. Although ranked second, they could meet Germany in the semi-finals with Italy surviving the other half of the draw to lose to Die Mannschaft, as the German national team is known,in the final.

On the field, meanwhile, home support and even familiarity with hot and humid conditions could boost Brazil. Luck will matter as players are injured and referees make controversial decisions. Soccernomically speaking, though, in-form Portugal, Colombia and Uruguay may be in for disappointment. For the German football machine and its fans, the numbers suggest the trophy is theirs for the taking.

Brazil will host the soccer World Cup, a tournament held once every four years, in June and July 2014. Thirty-two national sides have qualified for the competition. Participants include Spain, Ivory Coast, Iran, South Korea, Argentina, and the United States.

The term ‘Soccernomics’ was used as the title of a book written by Simon Kuper and Stefan Szymanski. It was first published in 2009.