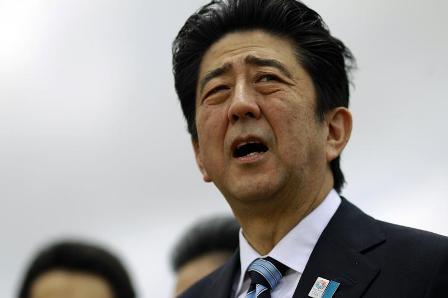 Shinzo Abe mustn’t be coy about raising Japan’s sales tax. A plan to double the country’s consumption levy is crucial to convincing bondholders that public debt won’t spiral out of control. If the prime minister is worried demand will take a hit, shopping vouchers could limit the damage.

The Japanese prime minister doesn’t want to go ahead with the plan to raise the 5 percent tax on consumption to 8 percent in April 2014, and then to 10 percent in 2015, Reuters reported on July 29. Parliament had approved the higher levies last year. Abe will take a final decision in the autumn after gauging the strength of the economic recovery.

The April increase is estimated to bring in additional annual revenue of 7.5 trillion yen ($76 billion). That won’t be enough to eliminate the budget deficit. Still, steadily raising the consumption tax, the second-lowest among advanced nations, is the “most appealing” solution to eventually lowering Japan’s public debt from 237 percent of GDP, according to economists at the International Monetary Fund.

Abe could take the current low yields on Japanese government bonds (JGBs) for granted and postpone the tax hike. But that would be risky. If inflation takes hold and the Bank of Japan stops printing money by buying JGBs, the debt overhang might become a bigger problem.

Concerns that the increased levy might squeeze consumption are legitimate: the economy slipped into a deflationary quagmire after the last sales tax hike in 1997. History need not repeat itself, though. Shopping vouchers could do much to ameliorate consumers’ pain.

Japan first embraced the idea in 1999, when elderly poor and families with children got vouchers worth 20,000 yen that expired worthless if not spent within six months. In 2009, after the global financial crisis, Tokyo distributed spending money to all residents.

Giving all of Japan’s 127 million citizens a 20,000 yen voucher would cost 2.5 trillion yen, the equivalent to temporarily knocking 1 percentage point off the tax increase. That would be better than delaying a fiscal commitment. Even if the vouchers merely displace spending that would have happened anyway, they will act as an insurance policy against a sudden drop in consumption. Abe’s anti-deflation campaign would remain on course, without undermining his government’s fiscal credibility.

The planned two-step increase in Japan’s consumption tax to 10 percent by 2015 might be delayed or watered down, Reuters reported on July 29.
Prime Minister Shinzo Abe may defer a decision until October, the Wall Street Journal reported on July 29, adding that he may resist calls for a change to the plan.
At 5 percent, Japan’s sales tax is among the lowest in advanced nations.