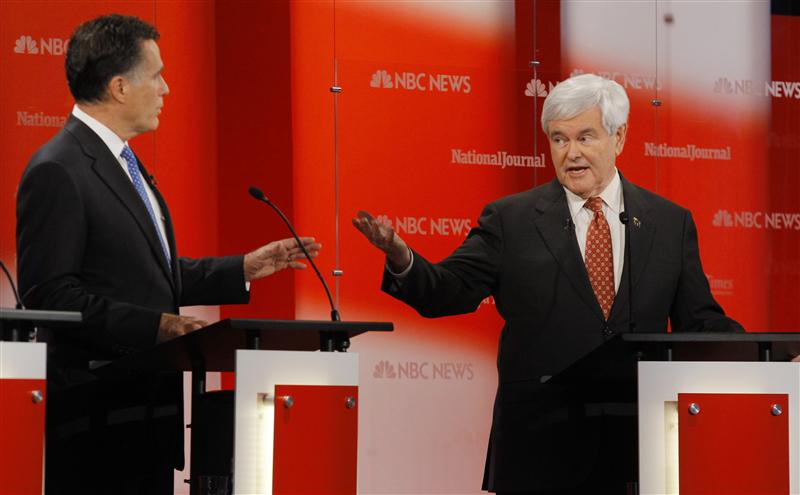 The Florida Republican primary’s big winner tonight may be Wall Street’s most infamous bank. Front-runners Newt Gingrich and Mitt Romney are trying to connect one another to the financial crisis. Gingrich paints his rival as an agent of the giant vampire squid, while Romney criticizes his opponent for being paid handsomely for advising Freddie Mac to inflate the housing bubble. But in a state still in pain from the bust, Romney’s line is winning.

In Florida, the battle occurs through the airwaves. Romney, the former Massachusetts governor, has spent more than $15 million advertising in the state, four times as much as his competitor. One Romney ad, in particular, zeroed in on Gingrich’s role in the housing bubble.

It argued that the former House speaker was paid $1.6 million by Freddie “while Florida families lost everything in the housing crisis.” Such criticism strikes a painful chord in Florida. In Tampa and Miami, for instance, home prices are down about 50 percent from their peak, according to S&P/Case-Shiller’s indexes through November.

Though he doesn’t have the financial firepower of Romney, Gingrich is attacking from a different angle. He has been complaining loudly about his opponent’s connection to Wall Street, claiming that the crony capitalism he says is embraced by President Barack Obama would continue in a Romney presidency. Gingrich even asserted in a Fox News interview this week that Republicans would be letting Wall Street and Goldman Sachs buy the election if Romney wins.

Each criticism is a stretch. Gingrich’s advice hardly led Freddie to suddenly decide to lower loan standards and pour more gasoline onto the raging housing boom. Similarly, Romney is a client of Goldman’s and has received a hefty amount of campaign contributions from some at the bank, but that doesn’t mean he’s in bed with the squid.

The firms’ narratives differ dramatically. Goldman remains a profitable firm that paid back its bailout quickly with a profit for taxpayers. Freddie is a bankrupt mess with little hope of ever paying in full for its rescue. Although the ballots have yet to be tallied, Romney looks poised to win. That’s at least a small victory for Goldman’s battered image.

The Florida Republican presidential primary takes place on Jan 31. The race has featured heavy advertising campaigns by front-runners Mitt Romney and Newt Gingrich. Through Friday, the two had spent more than $18 million, according to a report from Politico. Romney, however, has outspent Gingrich on ads three to one.

The two have accused each other of having ties to firms involved in the financial crisis. In an ad, Romney has noted Gingrich’s advisory services for Freddie Mac. In interviews, Gingrich has been asserting that Romney is an agent for Wall Street and Goldman Sachs, in particular.

Florida ranks second in the nation in foreclosure starts and completed foreclosures, according to RealtyTrac. Its economy was heavily reliant upon real estate, which helps to explain its 9.9 percent unemployment rate as of January, according to the Bureau of Labor Statistics. This is significantly higher than the national rate of 8.5 percent.