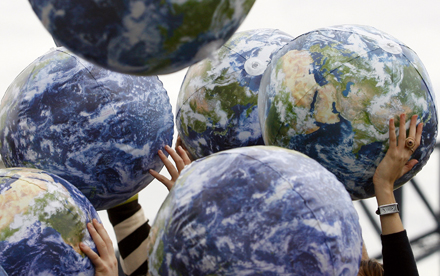 Inflationary pressure is coming off around the world. That’s encouraging. Soaring oil and commodity prices threatened an inflationary wave in emerging economies in 2011 which might easily have drowned their fast growth. But the inflation easing has come in part because monetary policy had to tighten and Europe has weakened. Could the easing of global growth turn into another big downturn?

That there is a slowdown is clear. HSBC describes growth in emerging economies as “lacklustre” in the fourth quarter of 2011. Another possibly worrying indication comes from The Baltic Dry Index for freight shipping prices. It fell to its lowest in nearly three years on Monday and is down by 40 percent from a year ago, an indicator of soft demand for commodities such as iron ore, coal and grain.

But there are positive sides to the curbing of inflationary and frothy growth in emerging economies. In 2011, extreme medicine to resuscitate the United States over-stimulated them. But an improving United States is currently refraining from a further large money-printing programme. That has meant oil and other commodity prices, though still elevated, have not headed up another few floors. That in turn leaves emerging economies room to ease monetary policy and bolster their growth if they need to.

A process of global rebalancing may also be taking place. Emerging economies cannot rely on high demand in the U.S. and still less in Europe to power them ahead. Ma Jiantang, the head of China’s statistics agency, said growth was likely to slow further as the country restructures away from exports towards domestic consumption. An Asia that relies less on trying to sell exports to struggling developed nations would be good news, making global growth ultimately more balanced and sustainable.

For now the global picture has its encouraging elements. The United States is improving. Emerging economies are still growing quite fast. But the risk that rebalancing topples into renewed downturn will remain so long as the euro zone wobbles on the brink of still worse crisis.