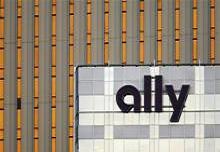 GM and Ally owe taxpayers $42 bln. GM is profitable but trades way below break-even. Ally’s combination of a solid core business, asset sales and reduced mortgage risk values it above what it owes. But only an outright sale would recoup taxpayer aid fast. That looks remote.

An Ally Financial sign is seen on a building in Charlotte, North Carolina May 1, 2012. REUTERS/CHRIS KEANE

On Nov. 2 Ally reported third-quarter net income of $384 million. The former finance unit of General Motors is roughly halfway through a plan to sell its non-U.S. assets. Last month it sold Mexican insurer ABA Seguros for $900 million and its Canadian auto lending business for $4.1 billion.

It is currently trying to find buyers for its European and Latin American auto lending units. Combined, these two have a tangible book value of $3.3 billion and assets of $16 billion.

Ally also intends to sell its $123 billion mortgage servicing rights portfolio. Management reckons this could fetch around $900 million, in line with the multiple its now-bankrupt home-lending unit ResCap fetched for some of its MSRs.

Ally received $17.4 billion in bailout assistance from the U.S. Treasury. It has so far paid back $2.7 billion. Treasury holds $5.9 billion of preferred securities and owns 74 percent of the business. Ally has to date paid the Treasury $3.1 billion in dividends.

On Oct. 31 General Motors reported third-quarter net income of $1.5 billion. The U.S. government owns just under 32 percent of the automaker. GM still owes $27 billion of taxpayer aid used to bail out GM and finance its 2009 bankruptcy.