Crushed by the greenback 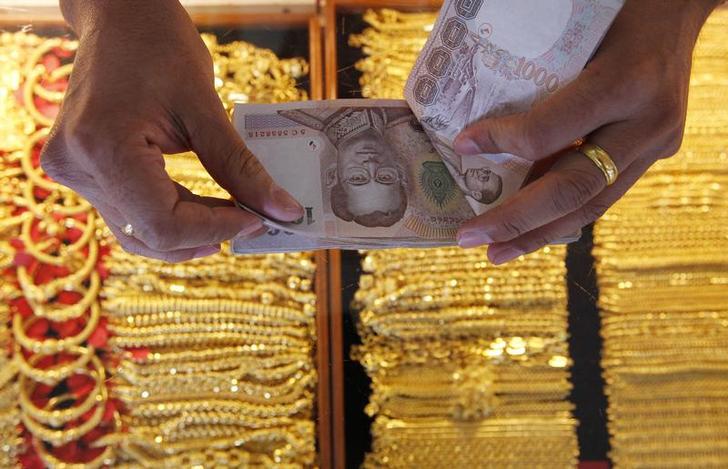 The golden metal is being crushed by the paper it despised. The dollar index is at a four-year high and the gold price at a four-year low, having fallen nearly 40 percent from its peak to below $1,200 an ounce. It is hard to see gold avoiding a swift plunge below $1,000 unless turmoil in other markets turns the precious metal into a temporary haven.

The latest precipitous swoon, down $100 since mid-October, has an element of irony. Though the end of U.S. quantitative easing is the chief source of the price decline, additional Japanese money-printing only did further harm by driving the dollar to a seven-year high against the yen. Gold functions as an alternative currency, hence its attraction when investors sought haven from a depreciating dollar, and the reversal now. It still has much more to fear when U.S. interest rates eventually rise, further supporting the greenback.

There are some stirrings of medium-term hope. Cheaper gold coins have attracted buyers. On Oct. 31 the U.S. Mint sold 1,425,000 ounces in American Silver Eagles, the most in a single day since January. But global demand for gold bars and coins was down by an annual 49 percent in the first half of 2014. It would take a lot of coins to change that.

For some gold miners the price of the metal is now below the cost of production. Mine production was up by an annual 4 percent in the first half of this year but falling prices do seem likely to begin to restrict supply, offering eventual support for a recovery. A firmer Indian rupee – India being a critical market for gold – could also eventually help. But anecdotal reports do not yet suggest firmer demand in India and the largest consumer, China.

Buyers may be waiting for still lower prices. And they are almost certainly right to. Gold’s best hope is to find a temporary perch. The yellow metal flew highest on QE and zero interest rates but global bonds and equities have not done so badly either. Panic elsewhere could give gold a temporary respite. Even that wouldn’t be one that lasts.

The spot gold price recovered by 0.3 percent to $1,144 per ounce in early European trading on Nov. 6.

A shopkeeper counts Thai baht banknotes as he buys gold from a customer in Bangkok's Chinatown.

The spot gold price recovered by 0.3 percent to $1,144 per ounce in early European trading on Nov. 6.