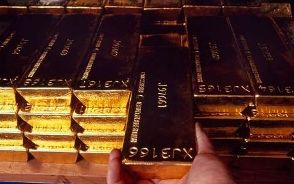 Gold is teetering on the edge of big falls. The Cyprus crisis and Korean tensions have helped the safe-haven metal surprisingly little. That is probably because gold faces its nemesis in the U.S. Federal Reserve’s growing unease about quantitative easing.

The Cyprus crisis should have been good for bullion. By threatening even insured bank deposits, the initial stages of the Cypriot debacle ought to have demonstrated gold’s “safety first” merits. But small Cyprus has not fanned fears about the euro zone sufficiently.

Instead, Cyprus has been slightly bearish for the metal. The island’s central bank may have to sell gold reserves to help raise around 400 million euros. Other euro periphery nations have far more gold. Italy is the world’s fourth largest holder, with 2,452 tonnes of gold, worth around 95 billion euros. Still, it seems unlikely for now that euro zone central banks will follow stricken Cyprus’s lead. On the contrary, global central banks are likely to remain gold’s chief support. Russia will probably remain a significant buyer this year.

It is in the global private investment community that bullion is losing favour and on a big scale. SPDR Gold Shares, an exchange traded fund, has seen net redemptions of about $7.7 billion in the year to date, according to IndexUniverse.

Analysts who were previously positive have turned negative. Goldman Sachs this week lowered its gold forecast for the second time in less than two months, from an average of $1,610 an ounce for 2013 to a still-optimistic looking $1,545 an ounce, and falling to $1,270 an ounce by the end of 2014. Spot gold was trading around $1,560 at 1100 GMT on Thursday.

The friend that risks turning into an enemy is the Fed. Its ultra-low interest rates and money printing favoured gold by debasing the dollar. Some Fed governors are now fretting about QE and want the programme to be tapered before the end of this year. It would take just a word from the Fed to send the yellow metal sprawling.

If events were to get out of control in the Korean peninsula, gold would get a stay of execution. But assuming tensions ease, hundred-dollar falls in the bullion price look likely and could occur this year.

Gold posted its biggest one-day fall in nearly two months on April 10, falling to $1,553, close to a 10-month low, after European Commission documents emerged suggesting that Cyprus planned to sell 400 million euros’ worth of reserves to finance part of its bailout.
A spokesman for the central bank later told CNBC no such plan was being discussed.

The Assaubayev family are in talks with various sources of finance to raise the US$509m required to buy back the assets of KazakhGold, the company they set up, ahead of its reverse takeover by leading Russian gold miner Polyus Gold.

Gold posted its biggest one-day fall in nearly two months on April 10, falling to $1,553, close to a 10-month low, after European Commission documents emerged suggesting that Cyprus planned to sell 400 million euros’ worth of reserves to finance part of its bailout.
A spokesman for the central bank later told CNBC no such plan was being discussed.