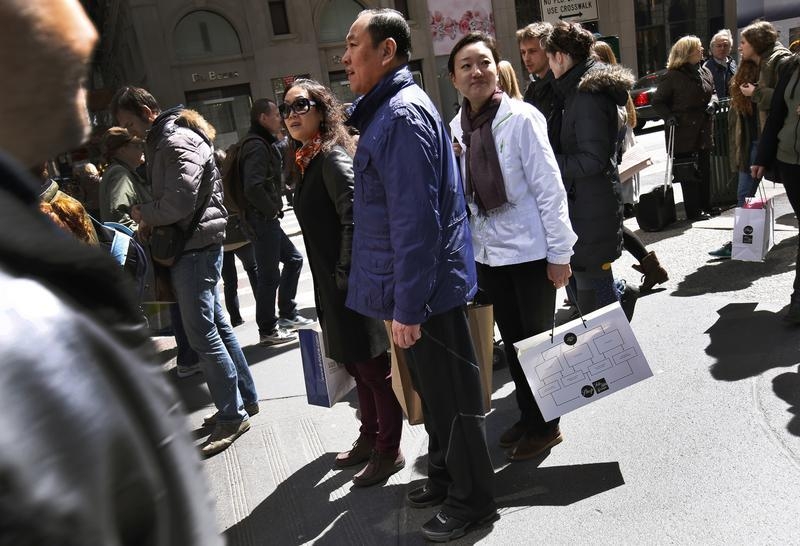 Retailers should enjoy China’s “Golden Week” while it lasts. This week’s holiday will see 6 million mainland tourists splurging in bazaars from Milan to Macau. But tax cuts will make shopping at home less painful, and younger Chinese prefer experiences to handbags.

Barring recession, overall Chinese travel is unlikely to slow, so absolute outlays are likely to remain hefty: Chinese spent 1.2 trillion yuan ($180 billion) abroad last year, according to official estimates. Indeed, the government’s failure to get a grip on pollution acts as an advertisement for locales where selfies aren’t smothered in smog. Where the money will end up is another question. Airlines can relax, but shopkeepers and consumer products firms who have battened on Chinese appetites have more cause to fret.

American arrivistes used to show off by marrying European aristocrats and refurbishing castles; Japanese tourists in the 1980s poured money into Fifth Avenue boutiques and apartments in Paris. The first wave of Chinese nouveau riche has been little different. But the economics and demographics of taste make such trends unsustainable. As bling has grown ubiquitous in China, its snob value has declined. At the same time, Chinese consumers are less interested in shopping generally, migrating to the more experience-centric consumption style of the wealthy in developed economies. A recent poll by CLSA shows a steady decline in the importance of shopping to Chinese tourists; it now lags behind safety, cost and “sights and culture” as a factor driving destination choice.

What’s more, ordinary products like makeup may increasingly be purchased back home, rather than in Seoul or Tokyo. The government just halved a hefty tax on cosmetics. That in itself is a minor move, but could be followed up by other cuts on consumer goods, especially those made in China but branded abroad, such as leather bags. Then, consider that the yuan could weaken more if the Federal Reserve hikes U.S. interest rates, denting visitors’ overseas purchasing power. That too could further tarnish Golden Week’s fading shine.

Tourist agencies in Taiwan and Hong Kong expect fewer visitors thanks to political tensions with the mainland. But package holiday operators say demand for trips to Japan and South Korea is still high.

UK agencies expect to receive more visitors due to the weaker pound.

Tourist agencies in Taiwan and Hong Kong expect fewer visitors thanks to political tensions with the mainland. But package holiday operators say demand for trips to Japan and South Korea is still high.

UK agencies expect to receive more visitors due to the weaker pound.