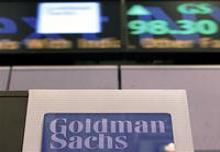 The firm led by Lloyd Blankfein gave more to investors by taking from bankers. Morgan Stanley is deferring all bonuses for top staff and should be trimming payouts. Jamie Dimon is taking a hit for the whale debacle. These are encouraging signs of a new attitude on compensation.

Goldman Sachs on Jan. 16 reported fourth-quarter net income of $2.89 billion on revenue of $9.24 billion. Annualized return on equity for the period was 16.5 percent and 10.7 percent for the year.
The bank set aside $1.97 billion in fourth-quarter 2012 for compensation and benefits. At 21.4 percent of revenue for the period, it marks a sharp drop from the 44 percent of revenue set aside for pay in the first nine months of the year and the 36.5 percent set aside in the fourth quarter of 2011.
Full-year compensation as a percentage of revenue for 2012 was 37.9 percent, compared with 42.2 percent in the previous year.
JPMorgan also reported fourth-quarter earnings on Jan. 16. Net income was $5.7 billion on revenue of $24.4 billion. Return on equity was 11 percent for both the quarter and the year.
The board slashed Chief Executive Jamie Dimon’s pay for 2012 to $11.5 million from $23 million in 2011 after the firm’s chief investment office lost some $6 billion on credit derivatives known as the whale trades.
JPMorgan’s corporate and investment bank set aside $2.2 billion in the quarter to cover compensation and benefits. At 29 percent of revenue, it was lower than the 34 percent for the first nine months of the year. For the year, the division set aside 33 percent of revenue for pay, compared with 34 percent in the year before.
Morgan Stanley is changing its compensation process to defer all bonuses for those earning above $350,000 with a bonus above $50,000, according to an exclusive Reuters report on Jan. 15. Half will be paid in cash, doled out in equal portions in May and December this year, December 2014 and December 2015. A quarter of the stock portion of the bonus will be paid in December 2013, another quarter at the end of 2014 and the remainder in December 2015.