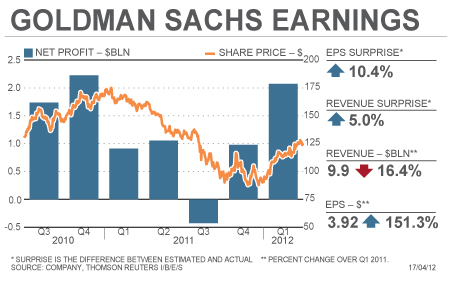 For a firm like Goldman Sachs that is so used to standing out from the crowd, the prospect of being in the middle of the pack must grate beyond belief. But after a spate of governance and image problems, executives at the investment bank should relish its first-quarter results getting lost in the crowd.

Goldman managed an annualized return on equity of 12.2 percent. That’s bang in line with universal banking rivals JPMorgan and Wells Fargo – and with what Citi’s core business appears to have achieved. But its first quarter fell short of JPMorgan’s investment bank, which, after stripping out the accounting hit on its own debt, cranked out a 23 percent ROE.

The comparison isn’t perfect. JPMorgan’s unit doesn’t carry the costs of the entire group. But other measures support the differences. Based on the imprecise value-at-risk metric, Goldman decreased its overall risk appetite to start the year while JPMorgan’s increased slightly. And with its larger balance sheet and lending relationships, Jamie Dimon’s bank may have benefited more from the sharp uptick in trading in interest-rate-sensitive businesses.

Goldman’s prudent approach probably translated into lower revenue than traders might otherwise have generated. But the result also could offset some concerns that the bank led by Lloyd Blankfein treats clients like muppets, an accusation leveled by a mid-level employee in a stinging and public letter of resignation.

Governments, which haven’t always been happy with Goldman’s actions, should at least be pleased with the latest figures. A third of the bank’s earnings were allocated to global state coffers, far more than its 18.7 percent tax rate in the previous quarter. Compensation, at 44 percent of revenue, is still higher than some peers. That arguably shortchanges shareholders – but Goldman’s board, which recently flouted good governance with its choice of a lead director – also opted to hand them a greater share of profit by raising the dividend by almost a third.

This not-too-hot, not-too cold earnings dish is decidedly average. But the lack of much, if anything, to pick on also must provide a welcome respite for Goldman.

Goldman Sachs on April 17 reported first-quarter net income of $2.1 billion, or $3.92 a share, beating the $3.55-a-share consensus estimate of analysts. Annualized return on equity for the quarter was 12.2 percent and the firm set aside $4.38 billion, or 44 percent of revenue, to cover compensation. Non-compensation expenses fell 8 percent from the fourth quarter and 9 percent from last year’s first quarter to $2.39 billion.

Goldman also said its board of directors approved an increase in the firm’s quarterly dividend to 46 cents a share from 35 cents a share.

Investment banking fees jumped 35 percent from the fourth quarter to $1.15 billion. Revenue from fixed income, currency and commodities increased 154 percent to $3.46 billion while equities trading revenue rose by a third to $2.25 billion, including a doubling of revenue for equities client execution. Revenue from investing and lending shot up by 119 percent to $1.9 billion, while investment management revenue fell 7 percent.