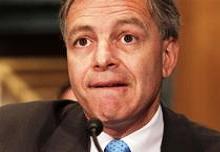 Goldman Sachs’ Mr. 25 Standard Deviation was a Wall Street rarity. Despite an outlandish 2007 characterization of the crisis – “We were seeing things that were 25-standard deviation events, several days in a row” – that raised concerns he didn’t understand fat-tail risks, David Viniar played a big role saving his bank from the mortgage rout and was the blue-moon banker who succeeds as a chief financial officer. He’ll be a tough act to follow.

Viniar led the call for Goldman to cut its U.S. residential mortgage positions in December 2006. That helped keep the firm stable financially, even if it didn’t stop the reputational damage that still endures. The highly paid Viniar also was one of the few calm voices during the depths of the financial meltdown in 2008.

His origins from Goldman’s structured finance department make his success all the more unusual. Recent attempts to move investment bankers into the finance department have been disastrous. Erin Callan couldn’t cope with the deteriorating conditions at Lehman Brothers. Merrill Lynch used the CFO position as a career stepping stone. Stan O’Neal served a stint as part of his grooming to be chief executive. It didn’t help him or the Thundering Herd avoid the subprime meltdown. Neither did O’Neal’s own choice for the job, equities banker Jeff Edwards.

Though his way with words was occasionally worrisome – another gem was describing trading as “prop with a client overlay” – Viniar brought crisis experience to the CFO’s office. During Goldman’s near-demise in 1994, he was in charge of funding, and was deputy CFO amid the 1998 collapse of Long-Term Capital Management and its fallout. His replacement, Harvey Schwartz, is no slouch either.

He’s a member of Goldman’s risk committee, sat on the company’s business ethics review committee in 2009 and the financial crisis must count as relevant on-the-job training. That’s no guarantee, however, that a trader like Schwartz – he’s co-head of the securities arm – will make a good CFO. He’ll at least have Viniar around for advice. Goldman’s putting him on the board. If Schwartz can handle his predecessor peering over his shoulder, it’ll make the big shoes easier to fill.

Goldman Sachs said on Sept. 18 Chief Financial Officer David Viniar would retire at the end of January 2013. Viniar has spent 32 years at the firm, 12 of them as CFO. He is to join Goldman’s board as a non-independent director after retiring. Goldman said it would seek to add more independent directors to the board.
Harvey Schwartz will replace Viniar as CFO. He is currently co-head of the securities division, having previously been global head of securities division sales.