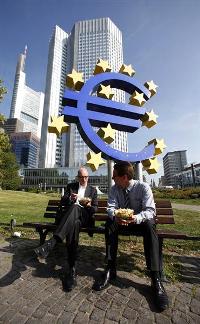 The European Central Bank will buy 40 billion euros of covered bonds. The amount, announced on Thursday, looks pitiful compared to banks’ funding needs, but the purchases needn’t be a total waste of time.

This is the ECB’s second sortie into covered bonds, debt that is well secured by mortgages and other loans. In 2009, a 60 billion euro programme was supposed to kick-start the 2.5 trillion euro covered bond market. The year-long programme did indeed provide a helpful kick initially, but by the end of the year the sovereign debt crisis had struck. Banks in peripheral economies were unable to sell any paper.

The new programme looks even less likely to succeed. In comparison to last time, the amount is smaller and the need is greater. Greek, Irish, Portuguese banks are locked out of the covered bond market and no Spanish bank has sold any since May, and no Italian bank since August. Banks across Europe have 1.7 trillion euros of debt over to refinance the next three years, and could be forced to sell two trillion euros of assets over the next year if funding markets don’t improve, Morgan Stanley reckons.

Still, the ECB can make a little funding go a long way, by avoiding the mistakes made in 2009. Then the national central banks tended to support their own lenders, so much of the money went to banks which had little need. To do the most good this time, the ECB should buy covered bonds from Spanish and Italian banks, which currently yield about 200 basis points more than comparable German paper. The ECB’s 40 billion euros could refinance all maturing Spanish and Italian covered bonds next year – with 15 billion euros left over.

Of course, even well targeted purchases can be no more than a palliative. Bank funding channels will remain impaired as long as the sovereign crisis and doubts over banks solvency persist. The ECB’s covered bond programme, like its new one-year funding facilities, is no substitute for a heavy dose of bank recapitalisation and fiscal adjustment.

The European Central Bank said on Oct. 6 that it would buy 40 billion euros of covered bonds over the course of the next year. The purchases will be the second such initiative by the ECB, after a 60 billion euro programme begun in 2009.
The ECB also announced further one-year unlimited funding facilities, extending the maturity of its facilities. Currently, the ECB’s longest facility is for six months.