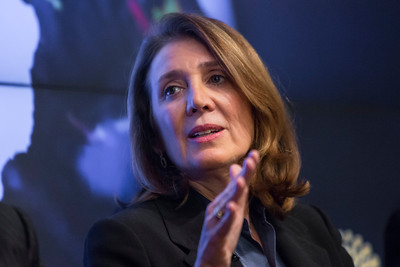 Google’s CFO search should have it feeling lucky. There’s a dearth of executives with the financial, tech and government know-how needed to help run a $400 billion company. Even fewer women fit the bill. Silicon Valley and Wall Street just can’t find people like Morgan Stanley Chief Financial Officer Ruth Porat fast enough. The challenge is to create more like her.

Porat grew up in Palo Alto, California, and graduated from Stanford before embarking on an almost three-decade career in investment banking. She was co-head of Morgan Stanley’s tech investment banking group amid the dot-com boom and then led the bank’s financial institutions group during the financial crisis. Porat also advised the U.S. Treasury on the bailout of Fannie Mae and Freddie Mac. The last five years have been spent assisting boss James Gorman navigate the difficult regulatory and industry climate to reshape the institution.

Such rare work experience will serve Google well. The dominant search engine is spending more time with authorities around the world. It has expanded its lobbying budget to become the largest in the tech industry. Trustbusters are poking around, and Google’s ambitions now extend to heavily regulated sectors including telecom, healthcare, autonomous vehicles and payments.

Google’s mountain of cash also keeps growing, and now exceeds $60 billion. Managing this hoard effectively, while minimizing taxes, is a complex task. Investors may love the rapid growth, but they also crave safe hands on the till and a veteran manager of risk. Facebook and Twitter also have recruited bankers to be CFOs.

At a market value five times that of Morgan Stanley, Google will present Porat with new complications. Given Wall Street’s reputation in IT, she may also have some technological catching up to do. And Porat will be finding her way as an outsider in a company tightly controlled by its two founders. Not many come armed with the skills necessary for such a position, but there are a growing number of them to fill. The biggest lesson from this latest hire is just how big a job-training task Corporate America has ahead of it.

Google said on March 24 it had hired Ruth Porat, the chief financial officer at Morgan Stanley, to be its new CFO. She will start on May 26.

Porat, who spent 28 years at Morgan Stanley, previously served as co-head of technology investment banking during the internet boom and global head of the financial institutions group during the financial crisis.