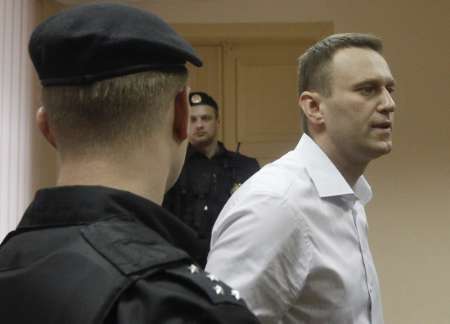 Alexei Navalny rose to prominence as a Western-style shareholder activist in a country devoid of Western-style capitalism. He took apart Russian companies’ available statements and numbers to expose graft, corruption and embezzlement detrimental to investors.

This was bound to lead him to take on a political role, since the vices he denounces are an integral part of the Russian system. So instead of being brought into government, he is on trial on dubious charges in the latest of the Vladimir Putin’s attempt to muzzle dissent. This may be, in fact, a sign of the Kremlin’s anguish and weakness. Western governments and investors should take note.

Navalny’s trial opened on Wednesday in Kirov, 500 miles from Moscow, before a judge known for issuing only guilty verdicts. Prosecutors have twice previously rejected the case as groundless. It was revived by Russia’s top investigator days after Navalny revealed that a close Putin ally secretly owned property in the Czech republic.

It may be just a deliberate attempt to tar the reputation of the long-time anti-corruption activist and his followers with the rot that he is fighting against. Or it is another example of the Russian president’s well-known vindictiveness: Navalny has called for Putin to be tried in court and described the ruling United Russia party as one of “thieves and crooks” in the run-up to the rigged parliamentary elections of 2011.

Still, that wouldn’t explain everything. The trial of rock group Pussy Riot last year and the recent hounding of non-governmental organisations because of what the authorities call “Western ties” have made it clear that Putin has begun to persecute dissidents as did his alma mater the KGB in Soviet times.

Navalny faces a jail term of up to 10 years. The absurdity of that potential sentence is by itself a sign of the Russian president’s insecurity. There are parallels with the later Mubarak era here. As Putin recedes further into his country’s past, investors may want to start thinking about the risks of investing in a potentially unstable future.

Russian opposition leader and anti-graft blogger Alexei Navalny (C) leaves after a court hearing in the city of Kirov April 17, 2013.

Protest leader Alexei Navalny accused the Russian authorities of laying trumped-up charges against him at the start of trial on April 17 which he says is part of clampdown on the opposition by Vladimir Putin.
The anti-corruption blogger made a 40-minute appearance in court in the provincial city of Kirov before Judge Sergei Blinov adjourned proceedings until April 24 to give the defence more time to prepare its case.
Navalny, 36, could face 10 years in jail if convicted of stealing 16 million roubles ($510,000) from a timber firm in Kirov in 2009 while working for the liberal regional governor.
He did not make any defiant statement to the judge as proceedings got under way but told reporters after the hearing was adjourned: “The case is totally falsified, trumped up. I am completely innocent.”