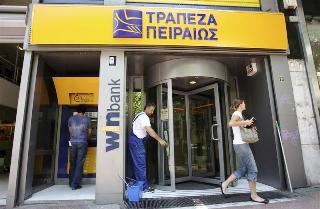 Piraeus has snapped up the Greek branches of Cypriot banks. Athens’ default last year is one of the reasons why Nicosia’s banks are in trouble. Greece has proved more accommodating with the island’s departing banks than it was last year with French lenders.

A man makes a transaction at an automated teller machine (ATM) as a worker cleans the revolving door at a branch of Piraeus bank in Athens.

Piraeus has won the race to snap up the Greek assets of Bank of Cyprus and Laiki, Reuters reported on March 22. The Greek bank’s shares rose 20.2 percent to 0.23 euros on Friday ahead of the news.
The Eurogroup of euro zone finance ministers said in a statement on March 16 that the fragile state of the Cypriot financial sector, linked to its very large size relative to the country’s GDP, would be addressed through an appropriate downsizing, with the domestic banking sector reaching the EU average by 2018.
It also welcomed an agreement on the Greek branches of the Cypriot banks, which it said protected the stability of both the Greek and the Cypriot banking systems, and did not burden the Greek debt-to-GDP ratio.