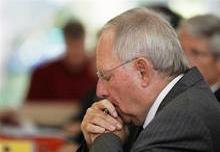 German Finance Minister Wolfgang Schaeuble worries that loose monetary policy is distorting markets. That doesn’t show for Greece, whose bonds still pay a hefty yield even after risks of a euro exit have receded. Athens remains an outlier in the peripheral dash for trash.

Greek 10-year bond yields have fallen from a peak of 12.9 percent on March 27 to 9.6 percent on May 13. The bonds currently pay a spread of 8.2 percentage points more than equivalent German debt, in line with the level seen before the first bailout in 2010.
German Finance Minister Wolfgang Schaeuble is worried that the level of stimulus provided by central banks is causing “critical problems” by prompting investors to make bad investment decisions, according to a Wall Street Journal article.
“We have increasing problems in too-low interest [rates], and interest [rates] are no longer the mechanism for the right decision on allocating resources”, Schaeuble said at a conference in London, according to a Wall Street Journal article published on May 9.