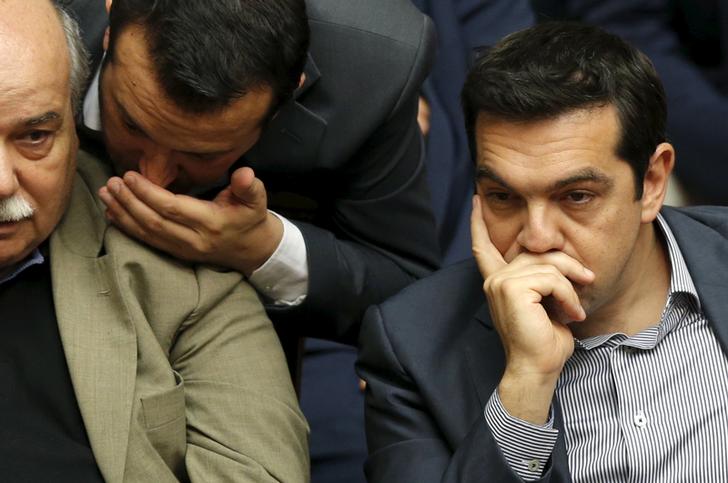 Greek banks have been dragged back from the edge of the precipice. Had marathon euro talks on the night of July 12-13 failed to produce an agreement, Greece’s four big banks would have collapsed. Instead, they will get 25 billion euros in recapitalisation resources. But there’s still plenty to fret about.

Lenders are almost out of liquidity. Despite capital controls limiting withdrawals to 60 euros a day, the sector will run out of cash sometime this week, a person familiar with the situation estimates. To survive, the European Central Bank needs to augment 90 billion euros of so-called emergency liquidity assistance, which is currently capped. It’s possible that the ECB Governing Council, which meets on Monday, will do just that now that Athens has a new deal.

It’s more likely things will stay as they are until July 15. Greek banks can probably just about survive until then with capital controls still in place. And euro zone politicians have made their support conditional on the Greek parliament passing a host of reforms by Wednesday. Delaying extra liquidity would help ensure this happens.

In theory, the 25 billion euros signed off to sort out Greek bank solvency should mean lenders don’t face a Cypriot-style bail-in, where depositors swallow losses on holdings over 100,000 euros. Instead, it is assumed that the European Stability Mechanism, Europe’s bailout fund, will be paid back by privatising “valuable Greek assets”.

But Greeks have made a notorious hash of attempted privatisations in previous bailouts. And while the 25 billion euros is supposed to cover losses arising from a forthcoming stress test, the scale of the hole in Greek banks could be epic. Around two-fifths of Greek banks’ loans were already non-performing, and capital controls will have made things much worse. Euro leaders’ insistence that Europe’s new resolution directive enabling senior creditor haircuts be passed in Greece by July 22 shows that bail-ins are on the table.

That doesn’t necessarily make uninsured depositor haircuts inevitable – at least some of the 32 billion euros of equity, hybrids and senior debt held by Greek banks as of March would theoretically be hit first, Barclays reckons. But right now, the true capital hole of the Greek bank sector – and its future shape – remains up in the air.

Lenders will obtain the resources from a new European Stability Mechanism programme incorporating the establishment of a 10 to 25 billion euro buffer, of which 10 billion euros would be made available immediately in a segregated account at the ESM.

Euro zone leaders said they were aware that a rapid decision on a new programme was a condition to allow banks to reopen, thus avoiding an increase in the total financing envelope. It said that the European Central Bank and Single Supervisory Mechanism would conduct a comprehensive assessment after the summer, and that the overall buffer would cater for possible capital shortfalls following the comprehensive assessment after the legal framework is applied.