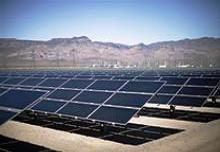 The collapse of U.S. natural gas prices below $2 is a fresh blow to solar just as another industry IPO is pulled. But don’t write it off. Solar is getting cheaper, too, and providers can set costs for decades. Gas, which America may soon be exporting, offers no such guarantee.

The price of natural gas in the United States fell to its lowest level in a decade on April 11, depressed by mild weather and a glut of supply.

It marks the first time since January 2002 that gas has dropped below $2 per million British thermal units. In March natural gas prices fell 19 percent, the largest drop in over a year, and have fallen another 6 percent so far in April.

American solar power plant developer BrightSource Energy said on April 11 it was withdrawing its initial public offering. It had hoped to raise up to $182.5 million.

The price of solar energy in certain areas of the United States has fallen below 8 cents per kilowatt hour - compared to about 6 cents for natural gas based on current prices - according to consultancy Green Tech Media.

The average cost of installed solar power dropped by 20 percent last year, according to the Solar Energy Industries Association, driven by the construction of larger-scale plants. The wholesale price of solar panels fell 50 percent last year.