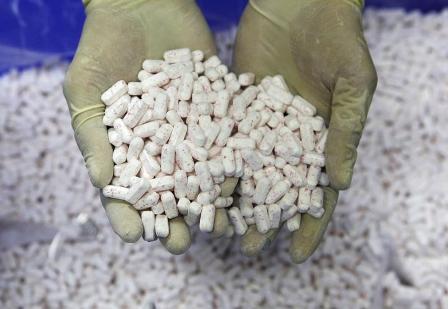 GlaxoSmithKline has a problem in China. The Chinese authorities have a problem that goes well beyond the UK pharmaceutical maker.

The GSK problem has a familiar ring. Along with U.S. rivals Pfizer and Johnson & Johnson, GSK settled American bribery cases. It is all too easy for these makers of high-margin products to share some of the revenue with the doctors who write prescriptions. The manufacturer, doctor and non-paying patients are all happy. Those who actually pay for the junkets and favours are often left to fume. In China, that is usually the patients.

The Chinese authorities have gone beyond fuming. The Ministry of Public Security accused GSK of transferring up to 3 billion yuan ($489 million) of kickbacks to over 700 travel agencies and consultancies. The goal was to increase market share in a pharmaceutical market worth $181 billion last year. The company says it has “zero tolerance” for such activities, and has cut off business with the agencies suspected of foul play.

GSK may be able to discipline its own overly-ambitious employees and representatives in China. But this sort of anti-corruption campaign – prosecution combined with publicity – will not be enough to stamp out the industry’s problem.

A full Chinese pharma recovery will be hard to manage. To start, the country is addicted to kickbacks and China’s doctors, who are underpaid relative to equally skilled professionals, may consider largesse from drug companies a merited bonus. Without a sense of shame, the national genius for fake paper trails is likely to prevail over corporate mission statements.

Then there are the patients, who mistrust domestic products – with reason. There have been numerous fake pharma scandals – the chief drug watchdog was executed for one of them as recently as 2007.

Finally, it takes a large collection of honest and competent bureaucrats to police an industry with this pervasive a problem. Such people are in extremely short supply in China. If the government wants to get much more than headlines out of this campaign, it will have to dedicate time and money to creating strong regulators.

A worker at Kalbe Farma's factory holds up a handful of tablets in Cikarang, on the outskirt of Jakarta May 8, 2013

Chinese police accused British drugmaker GlaxoSmithKline of channeling bribes to Chinese officials and doctors through travel agencies to boost sales illegally and raise the price of its medicines in the country.
Gao Feng, head of the economic crimes investigation unit at China’s Ministry of Public Security, said on July 15 that since 2007, GSK had transferred up to 3 billion yuan ($489 million) to over 700 travel agencies and consultancies.
China’s top economic planning agency, the National Development and Reform Commission, said on July 2 it was surveying production costs and prices at multiple foreign and Chinese drug companies, including GSK and Merck.
GSK reported 759 million pounds ($1.1 billion) in revenue from China in 2012, out of total revenue of 4.7 billion pounds.
GSK said it was deeply concerned by the developments and had stopped using the travel agencies identified by the investigation.
“GSK shares the desire of the Chinese authorities to root out corruption”, it said in a brief statement. “These allegations are shameful and we regret this has occurred.”