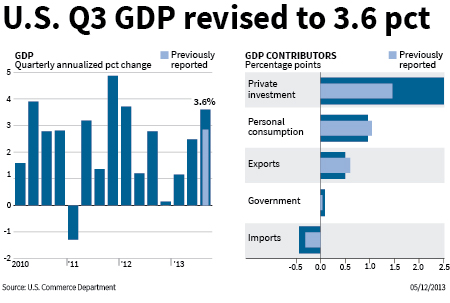 The new estimate of U.S. third-quarter GDP growth is more mirage than reality. At an annualized 3.6 percent, the number sounds promising, but much of the gain came from building up inventory. That suggests a return to sluggish expansion this quarter. Fueling sustainable growth requires more jobs and less Washington interference for the wealth effect to spread.

Private-sector inventory accumulation soared to $117 billion in the three months to September, double the previous quarter. That accounts for 1.7 percentage points of GDP growth and suggests a weak fourth-quarter number. That’s because merely sustaining this current elevated level would mean no growth at all. That would leave final sales of domestic product to carry the load. At 1.9 percent in the third quarter and 2.1 percent in the second, that’s not much to cheer about.

There is room for some optimism, though. GDP should get a boost purely from the nation’s lawmakers avoiding the kind of shenanigans they engaged in this year – from the sequester to the debt ceiling to the government shutdown.

Rising asset prices may also create more willingness to spend among a broader segment of the population. Home prices are up 12.5 percent this year, according to CoreLogic, and may have added around $2 trillion to house values, extrapolating from Federal Reserve data. Meanwhile, the Wilshire 5000 Index increased by almost a third this year to October, adding perhaps $4 trillion of wealth. If just 3 percent of that converts into new activity, it would add almost $200 billion to the economy next year – or 1.1 percent of GDP.

Rising employment is the key factor, at least for whether the Federal Reserve decides to cut back its purchases of U.S. Treasuries and agency mortgage bonds. If Friday’s November jobs report matches the ADP estimate of a 17 percent increase from October in private-sector employment, a gain of 215,000 jobs, it would be further evidence of acceleration in the recovery. More important, it would be good news for the millions of Americans still suffering from the anemic economic recovery.

U.S. gross domestic product grew by an annualized 3.6 percent in the third quarter, according to the second estimate from the Bureau of Economic Analysis, released on Dec. 5. The first estimate pegged growth at 2.8 percent.

The U.S. economy grew faster in the third quarter than initially estimated.

U.S. gross domestic product grew by an annualized 3.6 percent in the third quarter, according to the second estimate from the Bureau of Economic Analysis, released on Dec. 5. The first estimate pegged growth at 2.8 percent.