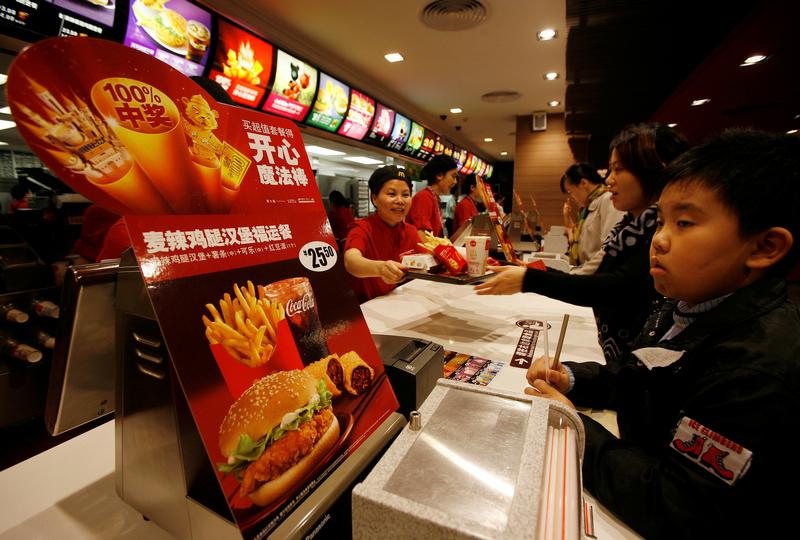 Super-sized. McDonald’s  is catering to both investors and customers. The $177 billion fast-food chain on Wednesday said comparable sales increased almost 13% in the three months to Sept. 30, well ahead of the 10% forecast by analysts, according to Refinitiv data. It’s not just a post-pandemic bounce. Revenue for the period was $6.2 billion, 14% higher than in the same quarter in 2019, before Covid-19 restrictions kicked in.

McDonald’s isn’t immune to labor shortages or inflation, but it has passed on the cost to undeterred customers. Chief Executive Chris Kempczinski said the company’s loyalty program increased the number of times people visited its golden arches. In the United States, McDonald’s sold them more burgers and nuggets each time, even at higher prices. That makes up for rising U.S. wages and commodity prices. McDonald’s shares were up 2.5% by lunchtime in New York.

McDonald’s isn’t sitting back either: It’s partnering with IBM to improve automated ordering at drive-thru locations. Making it easier for customers to get their fix of fries and milkshakes will keep the momentum going. (By Amanda Gomez)

Changing lanes. General Motors needs more gas in the tank. The $83 billion U.S. automotive giant reported operating profit above analyst estimates on Wednesday, and said earnings will be higher than it previously suggested. Its shares fell 4% anyway. GM is selling every car it can make, while wrestling with a shortage of microchips, but its declining market share in North America implies rivals, like electric vehicle king Tesla, are less affected.

One problem is that GM recently laid out big plans to invest in making electric vehicles. If its spending doesn’t change, but the number of cars it can sell falls, the company’s profitability could suffer. Already, GM’s targets suggest that its operating profit for the fourth quarter will be lower than the third quarter. If supplies of chips and other components don’t pick up, GM will have to decide whether it will trim its investment ambitions to defend its profitability – an unenviable trade-off. (By Jonathan Guilford)

World of difference. Worldline is a work in progress. That was investors’ verdict on the 16 billion euro French payments group after it set out growth targets on Wednesday. The company led by Chief Executive Gilles Grapinet has become a major European player by swallowing up rivals. Now it’s promising annual revenue growth of 9% to 11% over the next 3 years. By 2024 it expects to convert almost 30% of its top line into operating margin before depreciation and amortisation (OMDA) – a measure like EBITDA – from a pro forma 23% last year.

The targets exclude a slower-growing terminals unit, which Worldline plans to sell. Meanwhile, Grapinet hopes to grab market share as banks offload their subscale payments units. But Worldline shares dropped 13% as investors fretted about growth. If Grapinet hits his targets, Worldline should earn OMDA of about 1.5 billion euros by 2024. Assuming the terminals sale cancels out debt of around 3 billion euros, the company is valued at less than 11 times its 2024 OMDA, a fraction of Dutch rival Adyen’s multiple. Investors will take more convincing. (By Peter Thal Larsen)

Brewer’s droop. Heineken is suffering an Asian beer drought. Europe’s top brewer sold 5.1% less beer in the three months to September. The decline, which was twice as bad as analysts had expected, stemmed mainly from Asia, where new lockdowns and regional travel curbs dragged quarterly ale volume down by a third. In Vietnam, a key market, beer sales more than halved. This does bode ill for rivals Carlsberg and Anheuser-Busch InBev, who are yet to report quarterly sales.

There is light at the end of the bar. Vietnam has been gradually lifting restrictions since mid-September, and travel around Asia is likely to improve as vaccination rates climb. Yet for Chief Executive Dolf van den Brink, it’s still going to be a slow journey. Sales are only expected to recover to pre-pandemic levels in 2023, Refinitiv estimates show. Soaring raw materials costs will also pressure margins. It’s probably too early to drink to a full recovery. (By Lisa Jucca)

Open goal. As the old proverb goes, it’s an ill wind that blows nobody any good. On Wednesday, French insurer Scor’s share price soared over 10% after it posted a better-than-expected loss in the three months ending Sept. 30. Investors were granted a 200 million euro buyback and the 5 billion euro insurer’s premium sales were up 13% versus the same period in 2020.

Insurers have had a torrid pandemic. Business interruption claims and a dismal travel insurance market have meant shares of the likes of Allianz, Axa and Munich Re have still not returned to their pre-virus levels. Scor’s numbers, however, show a benefit from a post-pandemic surge of policy renewals which Scor was able to charge more for, because companies have busted through their no-claims terms. Better still, most insurers are in the same boat, meaning Scor can write stingier conditions without losing customers. Happy days, except for everyone else. (By Aimee Donnellan)

Customers buy food at a McDonald's restaurant in the southern city of Shenzhen January 29, 2010.