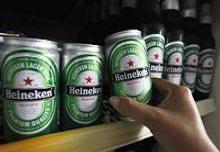 Heineken’s green-bottle brewery is in good shape. The family controlled Dutch beer company saw sales in the third quarter of 2015 increase 8 percent year-on-year, and now top 15 billion euros. That’s better growth than recorded by SABMiller and Anheuser-Busch InBev in their latest filings. Carlsberg dropped 4 percent in its last quarter. While Heineken’s three global peers are chasing growth through change, it is sitting pretty.

The Dutch brewer’s performance in the Americas stood out in the three months ending Sept. 30. It sold 10 percent more across the north and south continents. It also said sales were up in the United States, outperforming the beer market there. That’s a surprisingly sound achievement, amid the growing popularity of craft brews and doubts that Heineken’s version of mass-market fizzy beer could hold its own against homegrown Budweiser, Miller, Corona and others.

Heineken grew 10 percent in Europe – the region that contributes the largest slug of sales. That is impressive, given consumer weakness in the Old World and the parlous experience of Carlsberg which, with its newish chief executive, is deep in strategic-review mode.

Since Heineken reports ahead of rivals, they too may show improvement. AB InBev could prove that point with a trading update it is due to publish on Oct. 30. The Dutch brewer’s third-quarter organic growth – that is, before acquisitions – of 7.5 percent sits alongside a 3.9 percent advance for nine months, suggesting that the upturn has been recent.

While AB InBev is leveraging itself up big-time to buy SABMiller, Heineken’s balance sheet looks positively conservative. It has halted a 750 million euro buyback half way through, to keep its net debt below 2.5 times its annual earnings before interest, tax, depreciation and amortisation. Its deal-making activity has been limited to smallish purchases in Slovenia and the Ivory Coast, a craft beer label, and tidying up its partnerships with Diageo in Africa.

A bigger deal cannot be ruled out. But the trading evidence provided on Oct. 28 suggests Heineken can leave mega-mergers to others.

Jean-François van Boxmeer, chief executive of Heineken, said that the third-quarter performance was “strong” and consistent with earlier guidance for the full year. He added: “Heineken’s well-balanced global footprint, excellent portfolio of brands… combined with a powerful innovation agenda are expected to continue to deliver positive top and bottom line growth.”

A woman reaches for a can of Heineken at a restaurant in Bangkok July 20 2012. REUTERS/Sukree Sukplang

Jean-François van Boxmeer, chief executive of Heineken, said that the third-quarter performance was “strong” and consistent with earlier guidance for the full year. He added: “Heineken’s well-balanced global footprint, excellent portfolio of brands… combined with a powerful innovation agenda are expected to continue to deliver positive top and bottom line growth.”