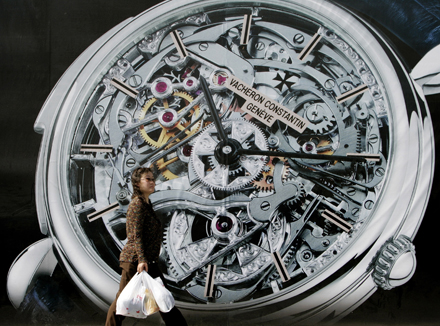 The cancellation of Graff Diamonds’ $1 billion Hong Kong initial public offering is the latest sign that high-end luxury goods companies are losing their shine. Hong Kong’s formerly bubbling art and property markets are cooling as mainland Chinese money ebbs. Tightening credit at home has played a role, and China’s political cycle may be another cause.

Companies at the top end haven’t been spared. Baoxin, a Chinese luxury car dealer, and Hengdeli Holdings, a premier brand watch seller, have seen their shares plummet 30 percent since May 1. Jewellers have done a little better. Tiffany’s and Chow Tai Fook fell 20 percent during the same period. Despite the theory that the super-rich are recession proof, it’s the more mass “soft” luxury that is holding up. LVMH and Coach have fallen only around 6 percent in the past two months.

Things are worse for supposed luxury investments. A bottle of 2008 Lafite now sells for $1,100 in Shanghai, down about 50 percent from its peak. Christie’s Hong Kong sales during first half of 2012 fell more than 30 percent from last spring. Sotheby’s has reported mainland buyers making up a falling share of its sales. Chinese buyers tend to be investors rather than connoisseurs. They are often momentum driven, so a small price correction can turn into a full retreat.

Hong Kong’s high-end property market is another victim. Mainland purchasers have helped push up the territory’s home prices by 80 percent since early 2009. But their share of new purchases fell slightly in the first quarter, as bank lending became tighter in China.

But don’t underestimate the effect of politics. Some 30 percent of mainland China’s luxury goods purchases are bought as gifts, according to Bain & Co – often by favour-seekers. As China’s leadership transition looms, wealthy buyers may be wary of greasing the wrong wheels. Swatch Group recently warned that very highly priced products had started to decelerate in China. Softer Chinese demand may hit the top end of the market hardest.

A woman holding shopping bags walks past a luxury watch poster in Beijing.