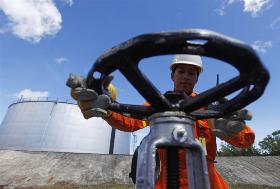 If $120 a barrel Brent crude is a threat to the global economy, someone had better tell the stock market. The MSCI World Index has largely kept pace with the rising price of oil this year. For now, stronger-than-expected economic growth appears to be overshadowing equity investors’ concerns about tight supplies of oil. Worries about Iran may keep trading volatile. But absent a serious flare-up in the Persian Gulf, any spike in crude prices should be mostly self-correcting.

It would be a mistake to dismiss the supply risks. But Iran’s decision to pre-empt the EU’s oil embargo by halting crude shipments to the UK and France is unlikely to have much of a permanent price impact. Neither country is reliant on Iranian crude and European buyers have had plenty of time to line up alternative supplies since the embargo was set in January.

Sure, the oil market is unusually tight – but the supply-side risks are well known and should already be priced in. That leaves demand as the more likely culprit behind crude’s recent run-up. Economic data in the United States is impressing and Asian demand has held up. Money remains incredibly loose too, with China, Europe and Japan all having taken fresh measures to boost liquidity in recent weeks.

In an environment with relatively few attractive investments, these factors may put a floor under commodity prices. But a demand-driven price spike should, for the most part, burn itself out before it threatens world economic growth.

April Brent crude futures rose briefly above $121 a barrel on Feb. 20, reaching an eight-month high after Iran pre-empted an EU oil embargo by halting exports to the UK and France. In the United States, Nymex light crude for March delivery approached $105 a barrel, its highest level since May 2011.
Ongoing supply worries come as prospects for oil demand are brightening. Recent U.S. economic data have come in stronger than expected. Ongoing moves to boost liquidity in Europe and Japan, along with policy easing in China, where the central bank cut its required reserve ratio on Saturday, may further buttress demand for crude.