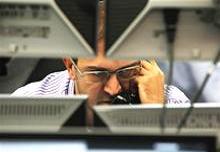 Higher volatility is the new normal in credit. For investors, it means the return of real winners and losers.

Credit markets have been kept buoyant by four years of central-bank support. The likely tapering of quantitative easing by the U.S. Federal Reserve now threatens to remove a large, artificial source of demand for bonds. The difficulty is that this isn’t the only reason why trading could be about to become choppier.

There are signs that the massive inflows into credit from both retail and institutional investors are starting to reverse. Exchange-traded funds, an important new source of support for credit in recent years, saw sharp outflows in June. The appeal of ETFs is partly that they can be exited faster than the illiquid assets they package.

Growth in liquid products like ETFs and mutual funds overlapped with another trend – investment banks cutting back their inventory as new regulation and pressure to deleverage made market-making more costly. Bank trading desks keep about 15 percent to 20 percent of the inventory they did in 2007, according to estimates by one asset manager.

It’s a recipe for greater volatility – and the unwind is just getting started. ETFs pooling investment-grade and high-yield corporate bonds fell from $122 billion to $115 billion during June, according to BlackRock data.

For clever investors, larger and more frequent swings in the prices of bonds and credit funds should be a welcome chance to shine. ETF selling in June caused U.S. credit spreads to move in an indiscriminate manner. This made credits deviate from fair value, and created discrepancies between the price of some companies’ debt and their stock. Recent market swings also distorted pricing between bonds and credit default swaps (CDS), or between CDS indices and the underlying credits they track.

More volatile markets should be seen as the start of a return to normal, undistorted trading conditions, and a finer differentiation between strong and weak credits. The risk is that much more erratic conditions may spook investors, and cause banks to cut back trading further, creating a vicious circle. Normalisation is welcome. It may also be long and tortuous.

A trader concentrates on his screens

Hedge funds specialising in corporate credit fell 2.66 percent in June, according to Hedge Fund Research. They are up 0.7 percent over the first half of the year. Funds specialising in asset-backed debt and convertible arbitrage lost 0.65 percent and 0.4 percent in the month, and are up 4.48 percent and 4.94 percent year to date, HFR says.
Investment-grade bonds denominated in dollars lost 2.9 percent in June and 3.6 percent in the first half of the year, according to Deutsche Bank data, based on Markit IBoxx indices.