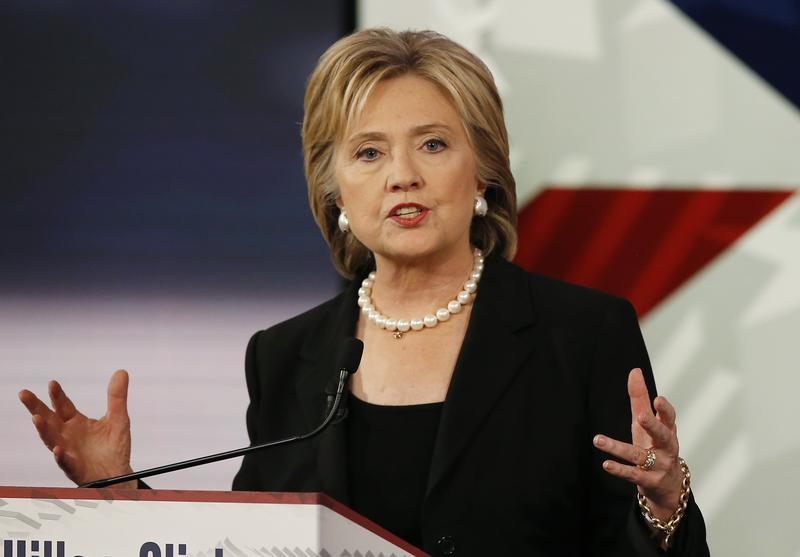 Hillary Clinton is taking advantage of a tax loophole provided by Donald Trump. The Democratic presidential nominee revealed on Friday that she paid a 34 percent effective tax rate last year, after taking into account deductions and other claims. She and her husband also pocketed more than $10 million last year, firmly positioning themselves in the elite 1 percent of top earners when inequality is a big focus of the election. Her opponent’s refusal to release his own returns makes Clinton’s wealth and its origins harder for Republicans to assail.

Her bid for the White House forced Clinton to give up her primary source of income: paid speeches. In 2014, she earned nearly $10.5 million in speaking fees, exceeding the $9.7 million her husband Bill was paid for doing the same. Private audiences included bankers from Goldman Sachs GS.N, Deutsche Bank DBKGn.DE and other Wall Street firms. The events drew sharp criticism from her former Democratic opponent, Senator Bernie Sanders of Vermont, and from Trump, both of whom accused her of being beholden to special interests.

The latest tax return shows the Clintons made far less than the nearly $28 million they did in 2014. Hillary raked in almost $1.5 million in six paid speeches while Bill made more than $5 million for his talks. Their time in public office has paid lucrative dividends.

It should be a rich seam for Trump and his devotees to exploit, and they may well keep trying to do so. Bucking decades of tradition, however, Trump has refused to release his tax returns. It has fueled rampant speculation about just how rich he is, how much he earns, the percentage of income he remits to Uncle Sam and the extent of his contributions to charity. The New York Times recently questioned whether he has taken advantage of provisions for real-estate developers to pay little or no taxes.

By opening up her IRS documents again, as presidential candidates from both parties have done for some four decades, Clinton may dull the effect of any attacks over her lucre. For Trump, the subject may be notably more taxing.

Republican presidential nominee Donald Trump has declined to release any of his tax returns, blaming a government audit. Over the last 40 years, presidential candidates of the two major political parties have released their tax returns.

Republican presidential nominee Donald Trump has declined to release any of his tax returns, blaming a government audit. Over the last 40 years, presidential candidates of the two major political parties have released their tax returns.