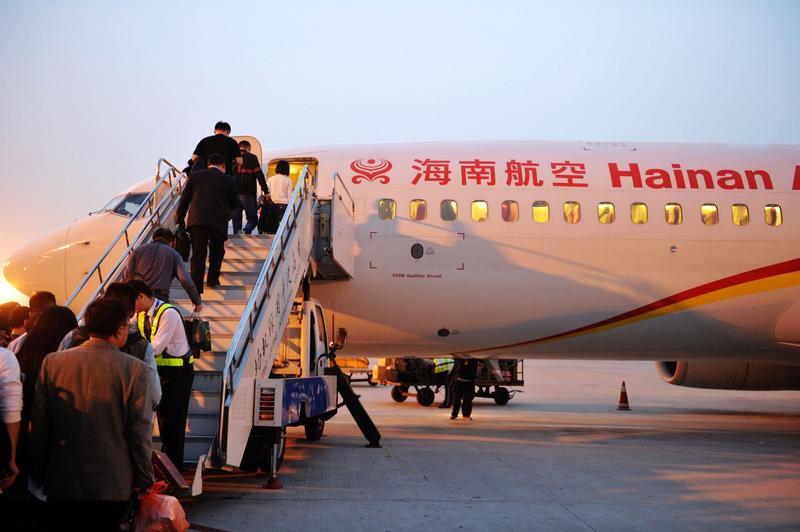 The deal-hungry Chinese conglomerate reportedly wants to buy into Value Partners. The $2 bln fund manager trades on a lofty percentage of assets under management, thanks partly to high fees. Still, if HNA wants to link Chinese investors with the wider world, this could be handy.

People board a plane of HNA Group in Qingdao, Shandong province, China, October 17, 2016. Picture taken October 17, 2016. REUTERS/Stringer ATTENTION EDITORS - THIS PICTURE WAS PROVIDED BY A THIRD PARTY. EDITORIAL USE ONLY. CHINA OUT. NO COMMERCIAL OR EDITORIAL SALES IN CHINA. - RTX2QAHX

Hong Kong-listed asset manager Value Partners said on May 22 its two main shareholders, Chairman Cheah Cheng Hye and co-founder Yeh V-Nee, were in talks about selling a stake to a third party.

The duo, who own 23.9 percent and 16.1 percent respectively, signed a memorandum of understanding in January about “a possible transaction involving an acquisition of interests in the company”, Value Partners said.

Value Partners shares rose 8.6 percent earlier in the day, before the company requested a halt, after Bloomberg reported that Chinese conglomerate HNA Group was in talks to buy at least part of Cheah’s stake.

Citing people familiar with the matter, the newswire said the parties aim to reach a deal within the next few weeks, and a transaction could value the company, one of Asia’s largest independent fund managers, at more than $2 billion. It may then seek to increase its stake, Bloomberg added, citing one of the people. HNA declined to comment.

This year HNA has reached deals to buy control of C-Quadrat, the Austrian money manager, and to acquire 25 percent of Old Mutual Asset Management, Old Mutual’s U.S. subsidiary. It has also amassed a near-10 percent stake in Deutsche Bank and, alongside partner RON Transatlantic, has agreed to buy a majority stake in SkyBridge Capital, the U.S. fund-of-funds business founded by Anthony Scaramucci, an adviser to U.S. President Donald Trump.