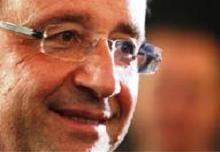 With growth on the menu and Greece on their mind, François Hollande and Angela Merkel have reasons to dispense with the usual niceties for their first meeting. The French president chose to fly to Berlin to meet the German chancellor on the very day of his inauguration – and not simply because he wants to smooth over some of the rough edges of the electoral campaign. His trip is also an acknowledgment that there is a fire in the euro house: neither France nor Germany can afford to waste any time before trying to put it out.

The best thing the two leaders could say about Greece after their meeting is nothing. Merkel, because any utterance will only add fuel to the Hellenic conflagration. Hollande, because at this stage he could only mouth platitudes on the topic. But public silence should be matched by intense private conversation.

Both leaders are challenged by the new crisis. Hollande must go beyond the campaign rhetoric about the need for growth-friendly policies in Europe: the initiatives he has in mind are irrelevant to the immediate risk of a messy Greek exit from the euro zone. For Merkel, the challenge is to avoid making her rigid stance on Greek austerity the main obstacle to the formation of a new government in Athens.

A productive conversation would lead to an either/or agenda. Either the Greeks can at last form a government able to negotiate with its creditors – in that case France and Germany should design the outlines of a face-saving deal – or an agreement proves impossible and Greece finds itself outside the euro. Then a contingency plan must be ready.

A deal will be difficult to achieve if it creates a precedent for unhappy governments willing to renege on the commitments made in exchange for aid. But Merkel’s Social Democrat opponents, emboldened by their recent electoral victories, are asking for some growth-friendly policies themselves. So the chancellor might be willing to make some concessions.

The worst scenario can still be avoided. But it would be unconscionable for both leaders not to plan for it.

François Hollande, who was inaugurated as France’s president on May 15, flew in the afternoon to Berlin for a meeting and informal dinner with German chancellor Angela Merkel.
Before he left Paris, Hollande appointed Jean-Marc Ayrault, the head of the Socialist Party’s parliamentary group in the French National Assembly, as prime minister. Ayrault is now tasked with forming France’s cabinet, the composition of which should be made known on May 16.