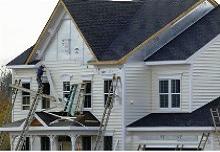 The monthly leap in U.S. home prices and a big quarter from builder D.R. Horton underscore buoyant attitudes about the housing market. Developer Tri Pointe could be capitalizing with a richly valued share sale. Investors should beware getting swept up in premature euphoria.

Tri Pointe Homes, which builds houses and planned communities in the United States, said on Jan. 29 it expects to sell 13.7 million shares, 2 million more than previously expected, priced between $14 and $16 apiece.
Separately, U.S. home prices increased 5.5 percent in November from a year earlier, the biggest increase since August 2006, according to the S&P/Case Shiller composite index of 20 metropolitan areas released on Jan. 29. The gain also marks 10 consecutive months of rising prices.
Homebuilder D.R. Horton on Jan. 29 reported that its quarterly profit more than doubled from a year ago. The company’s revenue grew by 39 percent in the fourth quarter to $1.2 billion, higher than what analysts had been expecting.