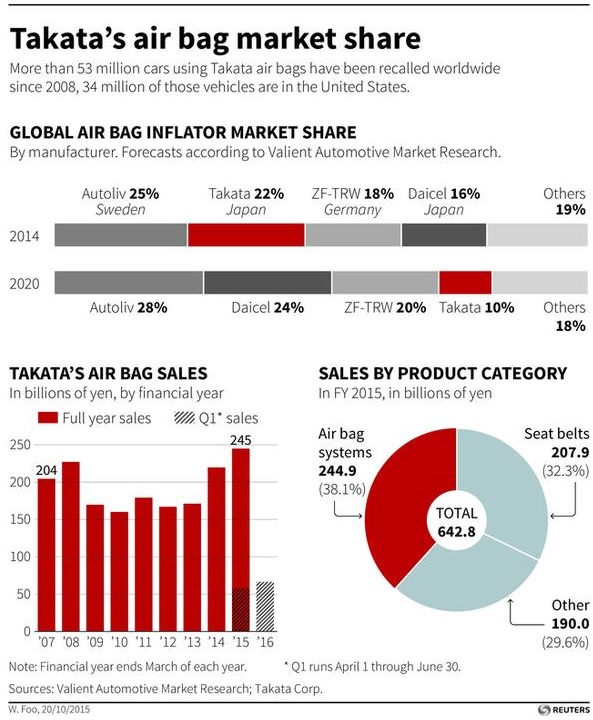 Honda has punctured Takata’s financial force field. For the past year, shareholders in the Japanese car parts group have mostly brushed off the growing scandal over exploding air bags which have been linked with at least eight deaths. But the carmaker’s announcement that it will stop using Takata air bag inflators has burst the belief that the supplier is too important to fail.

The $70 million fine that U.S. regulators slapped on Takata this week is just the beginning of its financial woes. The company will probably face further penalties in the United States plus claims for damages from the families of people killed or injured by its faulty products. Then there’s the cost of recalling and replacing inflators in as many as 34 million cars. These liabilities would overwhelm companies far bigger than Takata, which had assets of just 485 billion yen ($4 billion) at the end of June.

Yet while shares in the much larger Volkswagen have dropped more than 25 percent following its emissions-testing scandal, Takata’s market value had until recently hovered around the $1 billion mark.

Shareholders’ indifference appeared to rest on the assumption that its customers don’t want to lose one of only a handful of global air bag makers. Honda’s public rebuke undermines that belief. Others may follow: Mitsubishi Motors on Nov. 5 said it was also considering switching suppliers.

Inflators are only one component of an air bag system. So the switch is not immediately fatal for Takata’s air bag business, which brought in 38 percent of the company’s sales in the year to March. Besides, the long time lag involved in designing and producing new models means Takata will be supplying parts to Honda and others for many years to come.

Yet if Takata’s customers have lost faith in the company, they may also be less willing to help foot the bill of recalling and replacing faulty air bags. Takata shares have lost a third of their value in less than two days. Unless its financial force field can be repaired, they will fall further.

Shares of Takata Corp fell as much as 23 percent on Nov. 5, extending a sharp fall from the day before when top customer Honda Motor Co said it would stop buying a component at the heart of a multi-million-vehicle recall.

In a harshly worded statement on Nov. 4, Honda said it would no longer use Takata’s front air bag inflators. The carmaker said it was “deeply troubled” by evidence suggesting Takata “misrepresented and manipulated test data for certain air bag inflators”. Honda is the biggest customer for Takata air bags and holds a 1.2 percent stake in the company, according to Eikon.

The U.S. National Highway Traffic Safety Administration on Nov. 3 fined Takata $70 million for violations of the Motor Vehicle Safety Act. The fine could raise to $200 million if the Japanese group fails to meet its commitments or if further violations are discovered. Regulators have linked eight deaths – all in Honda cars – to the Takata inflators, which use ammonium nitrate and can explode with too much force, spraying metal fragments inside vehicles.

Takata said it would phase out ammonium nitrate in all its inflators by end-2018. “We still think our product is safe, but we realise there are many concerns from consumer, automakers and U.S. regulators,” Takata chief Shigehisa Takada told reporters.

Around 40 million cars have been recalled worldwide since 2008 due to the inflators.

By midday in Tokyo, Takata shares were down 23 percent at 914 yen.