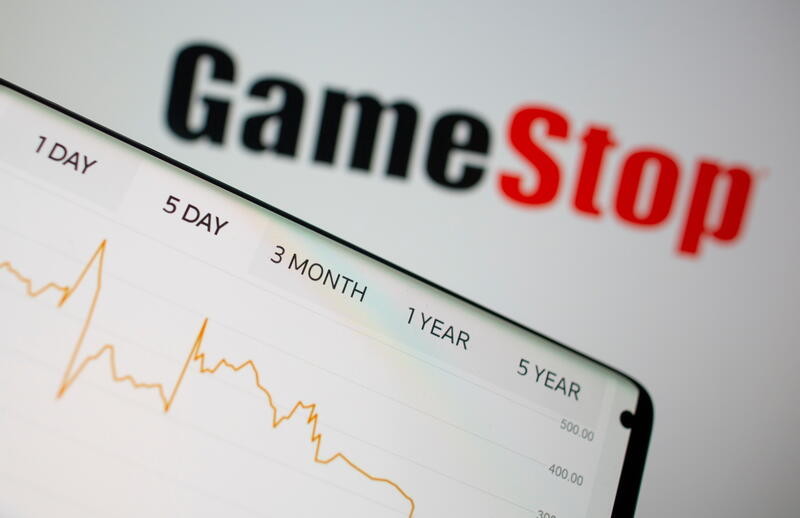 The video-game retailer has used this year’s 11-fold increase in its market capitalization to transform itself. Firstly, with new management, including Chief Executive Matt Furlong, an Amazon.com alum. And secondly, with cash from issuing new shares: $552 million in April, and $1.1 billion more this month.

GameStop is now a pile of money with a chain of stores attached. Cash now makes up half the company’s enlarged balance sheet, compared with 13% at the median U.S.-listed company, according to Refinitiv data. By investing that in technology, new products and even blockchain efforts, Furlong hopes to turn GameStop into a totally different business.

If the idea of a listed company full of cash looking to become something else sounds familiar, it’s because it’s also the idea behind special-purpose acquisition companies. Happily, GameStop comes without the fees and warrants that dilute investors in SPACs. Unhappily, it comes with a $14 billion market capitalization, which might make it the priciest cash shell going. (By John Foley)

Celebrity endorsement. Amazon.com just made a canny deal by ordering 1,000 systems from autonomous-driving firm Plus to retrofit conventional trucks. In exchange, it will receive warrants in the company, which is set to go public at a $3.3 billion equity valuation in a merger with a blank-check company. Amazon could buy up to 20% of Plus providing additional units are ordered, according to a filing on Monday. A similar past agreement shows that the e-commerce giant’s validation, while useful, might be expensive.

In 2017, Amazon agreed to buy fuel cells from Plug Power to electrify its forklifts and other equipment. Amazon eventually received warrants for about a fifth of the company after purchasing $600 million of gear and services.

Amazon boss Jeff Bezos’ blessing of both fuel cells and Plug Power helped the maker. Its shares are up over 20 times since before the agreement. Yet the discounted stake it exchanged for sales meant Plug Power’s revenue from Amazon in 2020 netted out at negative $310 million. That’s a pricey vote of confidence. (By Robert Cyran)

Fait accompli. So much for the value of dissent. Activists like veteran Wall Street agitator Dan Loeb’s Third Point look to have turned conformists on Tuesday as Vivendi secured 99.9% of present votes at its annual meeting to spin off and list a 60% stake in Universal Music. That’s despite some investors such as U.S. fund Artisan Partners criticising the strategy, which includes a pact to sell an additional 10% stake to Bill Ackman’s blank-cheque vehicle and keep a remaining one-tenth in the Vivendi rump that houses Vincent Bolloré’s medley of media and publishing assets.

True, Bolloré’s control of nearly 30% of the voting rights always gave him the upper hand. Still, independent-minded minorities might have hoped that Loeb – who owns a substantial Vivendi stake and has past form in taking on dominant family shareholders at Campbell Soup – would have pushed to extract better terms from Ackman. On 24 times estimated 2021 EBITDA, a modest premium to peer Warner Music, Universal might have an enterprise value of 40.5 billion euros, using Bernstein figures. The valuation for Ackman’s deal was only 35 billion euros. (By Christopher Thompson)

Killing the messenger. Apple Daily, a pro-democracy Hong Kong tabloid published by Next Digital, could be effectively bankrupted in the name of national security. Founder Jimmy Lai, who’s being honoured with a press freedom award, already sits in prison for attending unauthorised protests. Numerous other top executives also have been arrested.

There are two causes for concern. First, the National Security Law appears to be being applied retroactively to articles and behaviour prior to its enactment. So while Hong Kong leader Carrie Lam’s administration may try to reassure about press freedom, it cannot credibly promise that future laws won’t punish behaviour that’s legal today. Second, crippling commercial sanctions – in the form of blocked bank accounts and frozen assets – are being imposed before verdicts have been reached.

In mainland China, Alibaba founder Jack Ma may be “lying low” now, but it hasn’t stopped the companies he founded from being punished for things he said. The Apple Daily crackdown is bad news for the entire business community. (By Pete Sweeney)

Lost in La Mancha. Europe’s initial public offering market is blowing hot and cold. Spanish refrigerated truck firm Primafrio said late on Monday it would delay a float in which it planned to sell a 25% stake at a valuation of up to 1.7 billion euros. It’s the second Spanish IPO to get nixed this year, following renewables energy producer Opdenergy. French car parts distributor PHE also pulled a Paris listing.

Deals that make it over the line are having to make do with lower valuations and higher volatility, according to bankers. Despite conservative pricing, Paris-listed digital music label Believe and London-listed chip designer Alphawave IP slumped on debut, as did Spanish green energy firm Ecoener. Primafrio’s controlling family may have put off investors. But that hasn’t deterred tightly held Madrid-listed Acciona, which is selling a quarter of its renewables unit at an equity valuation of up to 9.8 billion euros. Investors may want to buckle up. (By Christopher Thompson)

GameStop stock graph is seen in front of the company's logo in this illustration taken February 2, 2021.