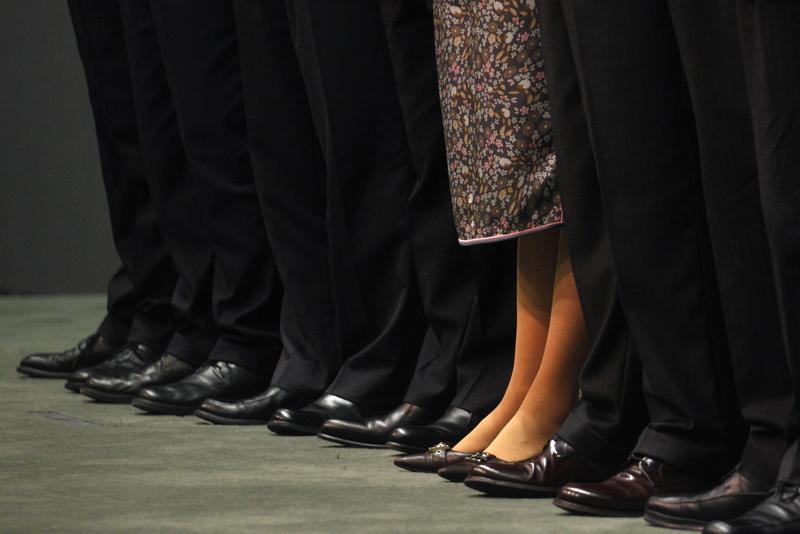 As International Women’s Day brings more sad stats about corporate diversity, $46 bln Hang Seng Bank can stand proud. Its shares have outperformed under three consecutive female CEOs and a cohort of female directors. It sets a powerful example for companies worldwide to follow.

Chief Secretary for Administration Carrie Lam Cheng Yuet-ngor (3rd R) stands beside other officials during a news conference to announce the new team of principal officials appointed in Hong Kong June 28, 2012, ahead of the 15th anniversary of the territory's transfer from British rule to China on July 1.

Ahead of International Women’s Day on March 8, dozens of reports laid out persistent problems of employment inequality around the world. More than 100 countries prevent women from taking specific jobs; 59 jurisdictions have no laws on sexual harassment in the workplace; and in 18 economies husbands can legally prevent their wives from working, according to a roundup of research published by Cambridge University Press on March 5.

Corporate efforts to promote more balanced boards, to increase the number of female chairs and chief executives and to address the gender pay gap have made slow and limited progress, the studies show. Board members of FTSE 100 constituents were 29 percent female in 2018, while at S&P 500 companies the proportion was 24 percent.

Women comprised only about 14 percent of directors at companies in Hong Kong’s Hang Seng index at the start of 2019, almost unchanged from a year earlier, according to a report released on March 7 by Community Business, a nonprofit organisation that advocates for more inclusive practices in Asia.

Only about 5 percent of S&P 500 and 6 percent of FTSE 100 CEOs are women. In Hong Kong, Hang Seng Bank has the only female CEO among the 50 constituents of the city’s benchmark index. Women occupy 10 percent of top management positions in S&P 1500 companies, according to JPMorgan.