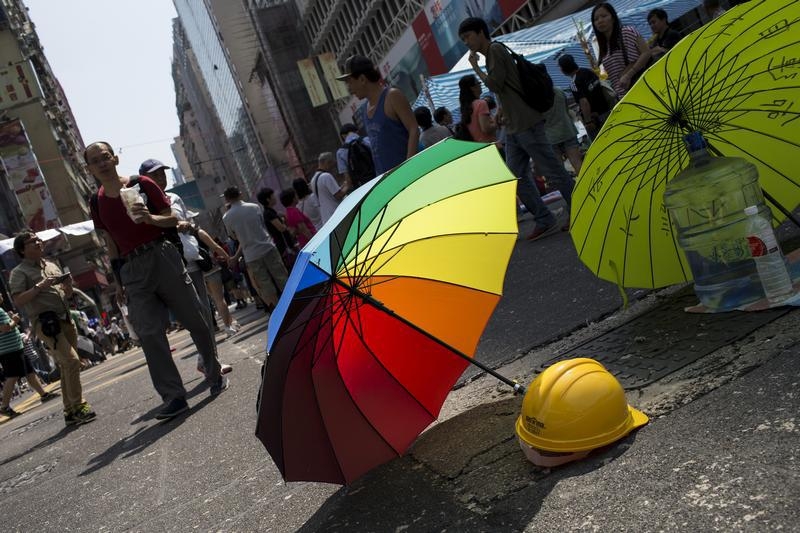 Pro-democracy demonstrators are clouding luxury sales in the Chinese territory. Yet the movement’s symbol has cast a light on Jicheng Umbrella’s upcoming listing. International brolly sales are on the up. After the smoke clears, however, the main worry is rising labour costs.

An umbrella and a security helmet is seen on a main road at the Mong Kok shopping district in Hong Kong October 6, 2014.

Chinese umbrella exporter Jicheng Umbrella Holdings on Oct. 15 filed a draft prospectus to list on the Hong Kong stock exchange. The group is raising funds to build a new factory and expand production, and has hired Ping An of China Capital to handle the offering. The group did not disclose how much it is seeking to raise.

According to the filing, Jicheng was China’s largest exporter of umbrellas and parasols by volume last year, exporting around 31 million units. The group reported full year revenue for 2013 of 483.6 million yuan ($79 million) up 28 percent. Net profit was 59.8 million yuan, up 35 percent over the same period.

In the six months ending June, most of the group’s sales were in the Japanese market. It sold roughly 19.7 million yuan worth of umbrellas to Hong Kong, its third largest market, or 6.7 percent of its revenue during the same period.

Hundreds of pro-democracy protestors calling for electoral reform continue to blockade main roads in Hong Kong’s government and business districts after weeks of demonstrations that attracted tens of thousands on to the streets.