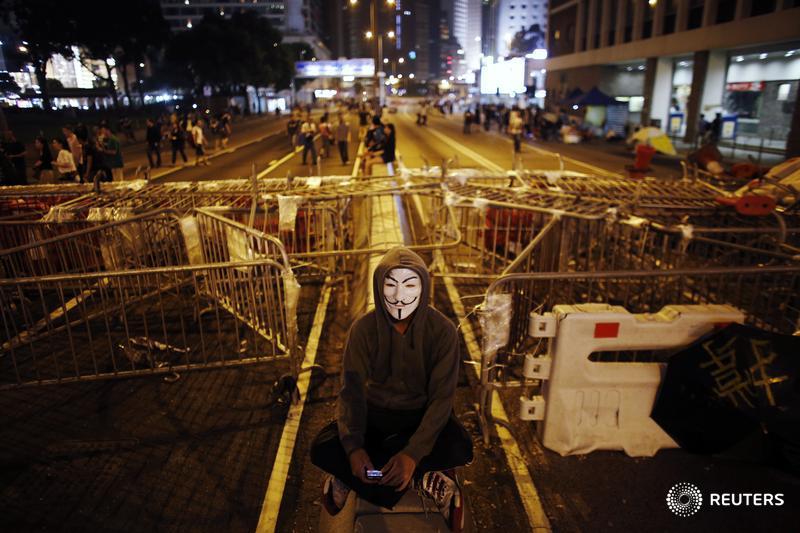 Hong Kong’s economy is coping with pro-democracy protests, now heading into their third week. Some retailers and other businesses have suffered and traffic is bad, but the city’s financial system is undisturbed. A prolonged standoff between protesters and the government matters less to investors than the slowdown in consumption and spending in mainland China. Warnings that the movement would threaten Hong Kong’s financial health look misplaced.

At its peak, the “Occupy Central” movement drew tens of thousands of demonstrators onto the streets of Hong Kong’s business and shopping districts, at times clashing with police and opposing groups. That harmed retailers during the important “Golden Week” Chinese national holiday. Some are reporting a double-digit slump in sales. Credit Suisse expects the city’s October retail sales to contract, year on year, for the first time since 2002.

Yet tourism has held up well. Hong Kong recorded 1.3 million arrivals from mainland China between Oct. 1 and Oct. 7, a 5.7 percent increase from last year’s holiday week. Markets are undisturbed, and with the exception of a few closed bank branches, most companies reported business as usual. The city’s China-dominated stock index is more or less unchanged since the protests kicked off.

Hong Kong retailers were already struggling with a slowdown in Chinese spending before the protests: Chow Tai Fook, the world’s largest jewellery chain by market capitalisation, reported a 43 percent drop in sales in Hong Kong and Macau in the three months to the end of June. Hong Kong’s private consumption growth slowed to 4 percent in the second quarter, from 7 percent in the same period of last year.

Now that formal talks between protesters and the government have been called off, a protracted stalemate looks likely. Activists will also have gained confidence about their ability to block Hong Kong’s main roads in future. The concern is that the Occupy movement has left open the possibility of even more unrest in the former British colony. Yet the protests have been overwhelmingly calm and peaceful. Short of a violent escalation, an additional layer of volatility may make little difference to investors already looking at an already-weakening economy.

A protester sits in front of a barricade on the main street to the financial Central district, near the government headquarters building, in Hong Kong October 4, 2014.REUTERS/Carlos Barria

Hundreds of pro-democracy protestors calling for electoral reform continue to blockade main roads in Hong Kong’s government and business districts after two weeks of demonstrations that attracted tens of thousands on to the streets.

The government called off formal talks with protest leaders on Oct. 9, blaming the movement’s fresh calls for people to rally. The decision came amidst revelations that Hong Kong’s leader, Leung Chun-ying, received $6.4 million in payments from an Australian company while in office.

The “Occupy Central with Love and Peace” civil disobedience movement is a response to a decision handed down by China’s parliament on Aug. 31 rejecting demands for free leadership elections in the former British colony.

The Acting Financial Secretary of Hong Kong said that overall, the city’s “stock market, foreign exchange market and financial system have continued to function normally and in good order” as of Oct. 9.

The Hong Kong Retail Management Association said that a survey of its members showed that during China’s “Golden Week” holidays from Oct. 1 to Oct. 5 retail sales had dropped between 15 and more than 50 percent.