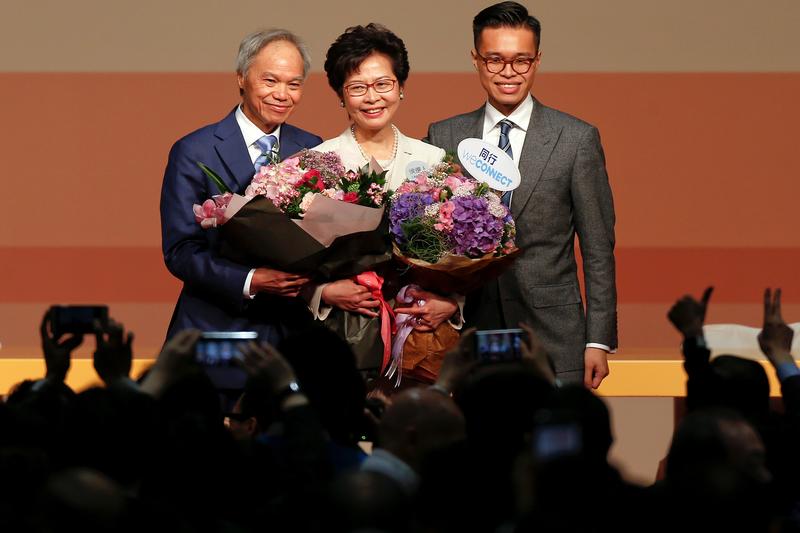 Unloved new leader Carrie Lam faces a steep climb. Growth is slow; social divides are deep. Loosening the purse strings might win a few hearts. Her real test will be preserving the rule of law, but she’s unlikely to stand up to the pro-Beijing faction she owes her job to.

Carrie Lam is congratulated by her husband and son after she won the election for Hong Kong's next Chief Executive in Hong Kong, China March 26, 2017. REUTERS/Bobby Yip - RTX32QHY

A poll carried out by Hong Kong University in the week before the vote showed 56 percent of respondents backing Tsang against 30 percent for Lam.

In her victory speech, 59-year-old Lam said healing the social divide in Hong Kong would be her priority. She said she would introduce a two-tier profit tax for companies, tackle the rising cost of housing through increased land supply, and boost educational spending.

Lam promised to defend rule of law and freedom of expression in the Asian financial centre. Under the "one country, two systems" principle, the Hong Kong Special Administrative Region enjoys greater autonomy and a distinct legal structure until at least 2047.

Hong Kong, a city of 7.3 million, does not elect its top political leader through universal suffrage but via a small election committee. Reformers say the composition of the committee gives disproportionate weight to pro-Beijing business interests.

Growth in Hong Kong’s economy has slowed over the past two decades. Gross domestic product increased 3.1 percent in the fourth quarter, below a median growth rate of 5 percent over the last 40 years, according to Thomson Reuters data.

Home prices in Hong Kong reached a new all-time high in January, according to government data, despite recent attempts to cool the market by implementing stamp taxes on sales.