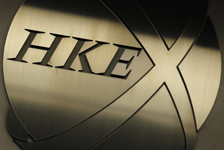 Hong Kong is playing the China card in the bidding for the London Metal Exchange. Proximity to the world’s largest consumer of metals might make up for the Hong Kong Exchange’s relative inexperience in trading commodities. But Beijing may open up regardless of who owns the LME.

For Hong Kong, the bid is a bold attempt to move beyond its main business of trading and clearing equities. A robust flow of listings from the mainland, and less intense price competition than that facing its rivals in the West, have made Hong Kong the world’s second-largest exchange by market value, behind CME Group. But the flow of new issues from China may have peaked. The LME could drive a new revenue boost.

There’s no question that China is under-represented on the LME. Though the country consumes 40 percent of the world’s metals, China-related trading is estimated to account for just 20 percent of LME volumes. If China-related ownership had helped lift that figure to, say, 30 percent, the LME’s 2010 revenue would have been boosted by roughly 10 percent.

Such a shift is largely in Beijing’s gift. The LME currently has just one Chinese member and a handful of companies which do business through other members, as Beijing restricts domestic firms from trading on foreign exchanges. Greater Chinese participation would also favour current LME members such as JPMorgan and Goldman Sachs, which make money from trading, financing and other services.

Hong Kong often stands first in the line when China opens up. But it’s unclear that the door for the LME will open faster under Hong Kong ownership. Chinese authorities are concerned that local firms’ risk controls aren’t up to global standards, after a few high-profile trading losses. They also want to give time for the Shanghai Futures Exchange to develop before allowing LME’s warehouses in.

Meanwhile, Hong Kong’s lack of metals experience counts against it. Rival bidders such as CME Group, NYSE Euronext and InterContinental Exchange, are better positioned to cut costs and modernize the 130-year-old exchange. Boosting volumes from China may trump such considerations. But Hong Kong still has to prove the China card is its to play.

The London Metal Exchange said on May 8 it had received a number of detailed proposals from a shortlist of bidders regarding a potential acquisition of the exchange. The LME said the board would now consider the proposals and give shareholders further information.
In 2010, the LME made an after-tax profit of $15 million on revenue of $80 million. Analysts have valued the exchange at about 1 billion pounds ($1.62 billion).
With new fees of $0.79 per contract, and a total of 147 million contract volume in 2011, the price values LME at about 40 times earnings according to BNP Paribas.
Bidders for the LME, which is owned by its members and has Europe’s last trading pit where orders are shouted out between traders, include Hong Kong Exchanges and Clearing, CME Group Inc, NYSE Euronext and InterContinental Exchange.
Deutsche Bank, HSBC and UBS are providing a $2 billion bridge loan to HKEX to help it finance the offer, according to Thomson Reuters LPC.