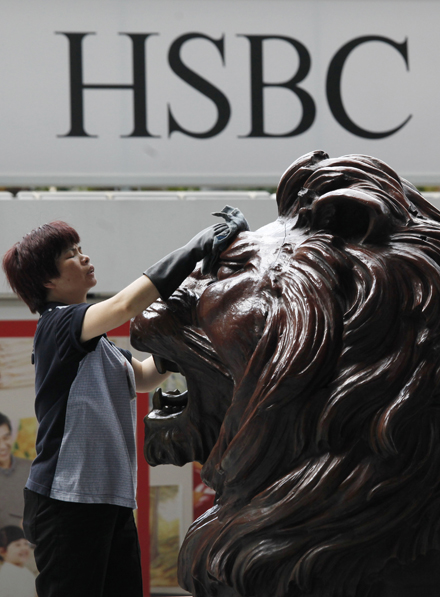 Being HSBC is about as good as it gets in global banking right now, but that only shows how much the sector is challenged. Europe’s biggest bank has healthy capital, an enviable funding position and a sizeable exposure to emerging markets. Even so, HSBC was dragged down by the euro zone crisis in 2011.

The UK-based lender’s pre-tax profit fell by 45 percent between the first and second halves. Turmoil in European markets was especially visible in its investment banking business. Rates (sovereign debt) and credit were a washout in the last six months of the year: as a primary dealer to major euro zone governments, HSBC gets hit when sovereign bond prices fall.

True, the investment bank achieved just over a 10 percent increase in revenue in the fourth quarter relative to the third, when others slumped – Morgan Stanley and Citi both saw revenue fall by half in their investment banks. But HSBC’s $1.2 billion of pre-tax profit in the Global Banking and Markets unit was still dismal compared with what the machine has previously delivered.

Diversification helped. European business suffered $431 million loss in the fourth quarter, but Asia was broadly flat. And a moribund European economy hasn’t yet fed through to credit quality in the East. Hong Kong registered both a quarter-on-quarter increase in pre-tax profit and a fall in bad debt costs.

It’s hard to fault the strategy of Chief Executive Stuart Gulliver. He’s hacking away at costs and selling non-core businesses, jettisoning assets in Japan, Thailand, the United States and South America in the last year. Meanwhile, the bank has managed its balance sheet defensively, cutting back trading assets by two-fifths since June, while almost doubling the amount it leaves on deposit with central banks. While these actions will help preserve value, they aren’t a recipe for growth.

Gulliver has given himself until 2013 to achieve a cost-to-income ratio of at most 52 percent and returns on equity of at least 12 percent. He missed these targets by a nautical mile in the last quarter. Yet HBSC still trades above book value. In global banking, that’s the reward for being the best of a bad bunch.

HSBC reported an underlying pre-tax profit of $17.7 billion for 2011, a 6 percent fall on 2010. Pre-tax profit in its European businesses fell by 61 percent during the year.
In the fourth quarter, group pre-tax profit was $3.3 billion, compared with $3 billion in the previous three months, after stripping out the effects of the changing values of HSBC’s own debt, and certain hedges. Annualised returns on equity for the quarter on an underlying basis were 5.8 percent.
Stuart Gulliver, who took over as chief executive in early 2011, has set out a strategy of achieving a 12-15 percent return on equity by 2013, and a cost-to-income ratio of 48-52 percent. Costs were equivalent to 67 percent of income in the fourth quarter, the worst showing in at least two years.
The Global Banking and Markets unit, which includes HSBC’s trading and investment banking businesses, reported a $2.2 billion pre-tax profit in the second half of 2011, compared with $4.8 billion in the first half. Its rates and credit businesses were loss-making in the second half of the year.