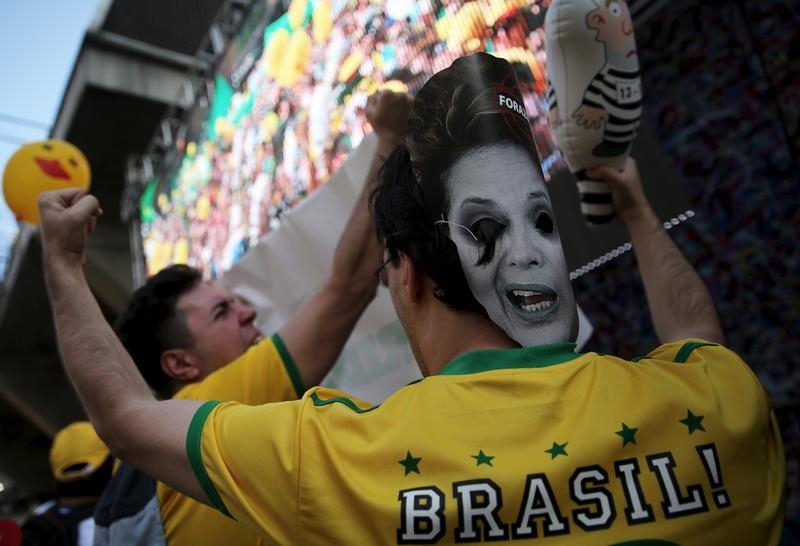 The vote to oust Brazil’s president from office makes a new, pro-business administration more likely. Stocks and the currency have already soared on the prospect. But the economy is a mess and the probable new government will be hobbled by protest and scandal.

A demonstrator wears a mask depicting Brazil's President Dilma Rousseff as he looks at a big screen showing a session to review the request for Rousseff's impeachment in Brasilia, during a protest against her at Paulista Avenue in Sao Paulo, Brazil, April 17, 2016. REUTERS/Nacho Doce

Brazil’s ruling Workers’ Party conceded defeat on April 17 in a lower house vote to impeach President Dilma Rousseff for breaking budget laws to help boost her re-election campaign in 2014. The party said it would focus on blocking the move to remove her from office in the Senate.

If the Senate now decides to put her on trial, in a vote expected to be held in early May, Rousseff would be suspended from office for up to six months, and Vice President Michel Temer would replace her. If the Senate finds her guilty, Temer would complete her term, which runs through the end of 2018.

Brazilian stocks have gained more than 20 percent so far this year as Rousseff’s political woes mounted, while the real has strengthened more than 10 percent against the dollar. Investors were betting her impeachment would herald more market-friendly economic policies. The Brazilian economy shrank nearly 4 percent last year and is set to contract by as much again in 2016.