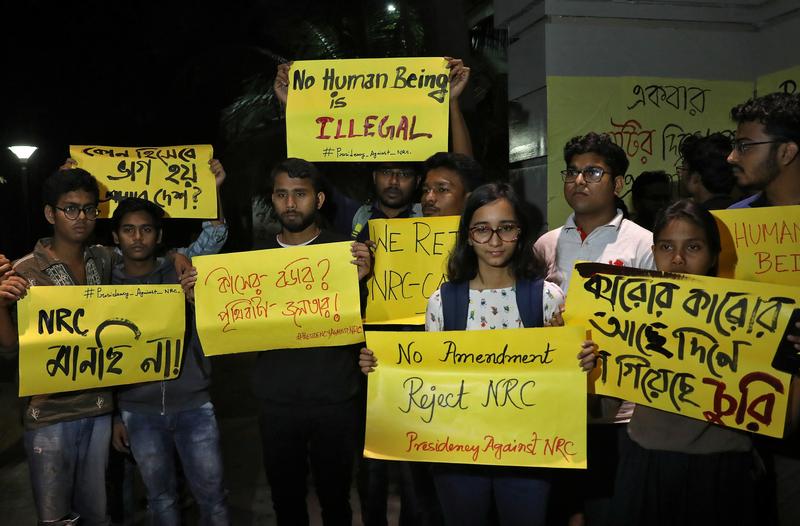 A law easing the path to citizenship for some non-Muslim migrants has led to violent protests and a partial internet shutdown. Japan’s Shinzo Abe cancelled a visit. With growth slow and jobs a problem, it’s a risky time to tinker with divisive issues.

Students display placards as they attend a protest against the National Register of Citizens (NRC) and the Citizenship Amendment Bill (CAB), a bill that seeks to give citizenship to religious minorities persecuted in neighbouring Muslim countries, in Kolkata, India, December 10, 2019.

Protests over a new citizenship law spread to student campuses across the country on Dec. 16. A day earlier, police officers entered a campus in New Delhi and fired tear gas to break up a protest that left at least 100 people wounded.

Under the law passed by parliament last week, religious minorities such as Hindus and Christians in neighbouring Muslim-majority Bangladesh, Pakistan and Afghanistan who settled in India before 2015 will have a path to citizenship on grounds they faced persecution in those countries.

Prime Minister Narendra Modi called for calm, saying the protests were deeply distressing. "Debate, discussion and dissent are essential parts of democracy but, never has damage to public property and disturbance of normal life been a part of our ethos," he said in a tweet.

The most violent protests during recent days have occurred in the northeastern state of Assam where mobs torched buildings and train stations. At least two people were killed.