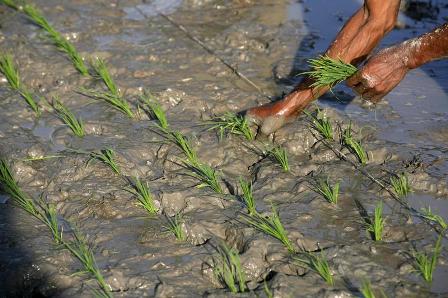 A plan to guarantee cheap grains to 800 million citizens will threaten more than the shaky state budget. With the government as a forced buyer, prices in the thinly traded world rice market may spike whenever drought threatens India’s crop, pushing the pain on to poor countries.

A farmer plants saplings in a paddy field on the outskirts of Agartala, capital of India's northeastern state of Tripura, July 9, 2012.

The Indian government on July 4 passed an executive order creating a legal entitlement for 67 percent of the country’s 1.2 billion people to receive highly subsidized food grains from the state.
A December 2012 discussion paper issued by the Commission for Agricultural Costs and Prices estimated the programme will cost $25 billion annually in subsidies.
The 0.8 percent of GDP that the government intends to spend on food subsidies this fiscal year will rise by 0.1 to 0.2 percentage point, according to Morgan Stanley.
India was the world’s largest rice exporter last year, supplying 9.2 million tons to global markets.
Ten countries - Nigeria, China, Iraq, Cote d’Ivoire, South Africa, Indonesia, Philippines, Senegal, Brazil and Bangladesh - are forecast to import 12.6 million tons of rice this year, or a third of the world’s total trade in the grain, according to the UN Food and Agriculture Organization.