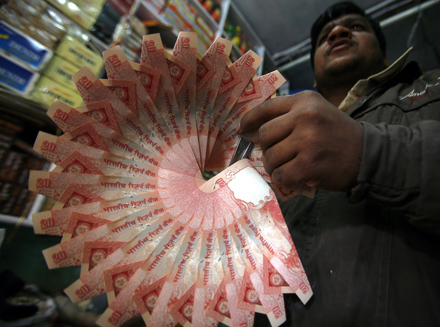 New Delhi’s surprise rise in its borrowing target provides the perfect excuse to push harder on selling stakes in state companies. Market conditions aren’t great but, given the benefits to the economy of less state ownership, India should sell at almost any price.

A shopkeeper holds a garland made of Indian currency notes inside his shop at Noida.

India will borrow $44.9 billion in the six months from Oct. 1, $10.8 billion higher than budgeted in February, the government said. Investors had been expecting additional borrowing, if any, to be around $4 billion to $6 billion.
Slowing growth and rising interest rates to fight high inflation have put pressure on government finances. New Delhi is far behind target on its plans to sell holdings in state-controlled companies. In the first six months of the fiscal year (which runs from April to March), disinvestment raised just $250 million. The budget called for $8.2 billion in the full year. A $2.5 billion share sale in Oil and Natural Gas Corp was recently put on hold.
R. Gopalan, economic affairs secretary, on Sept. 28 hinted that cash-rich public sector companies might be asked either to buy back some of the government’s shares in themselves or even buy shares in other state enterprises.