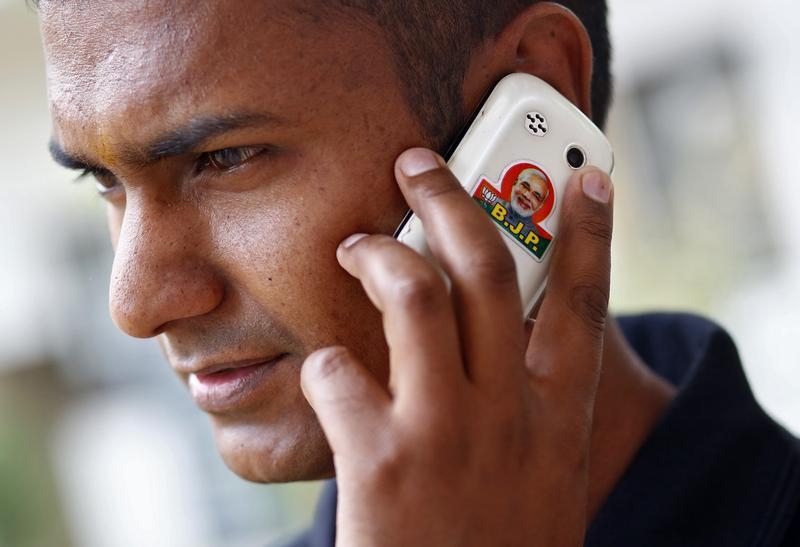 The top mobile operators are limbering up to renew licences that support as much as 70 pct of their revenues. The worry is that rivals or new entrants such as Reliance Jio may bid aggressively for additional bandwidth. An expensive auction will weigh on balance sheets.

A man speaks on his mobile phone, which has an image of Hindu nationalist Narendra Modi, the prime ministerial candidate for India's main opposition Bharatiya Janata Party (BJP), outside the party headquarters in New Delhi May 12, 2014.

India’s Supreme Court said on Feb. 26 that the government could go ahead with its telecom spectrum auction but that a result would not be final until a round of legal complaints on the sale mechanisms was completed.

The auction is due to start on March 4. The government is aiming to raise at least 823.95 billion rupees ($13.3 billion) from the sale.

It expects around one quarter of that amount to take the form of upfront payments that will help the government plug its fiscal deficit for the current financial year, which ends in March.

The next Supreme Court hearing is scheduled for March 26.

Eight telecom operators have submitted deposits to participate in the auction.

Bharti Airtel, India’s biggest mobile phone operator by users, raised $310 million through the sale of shares in its mobile tower unit Bharti Infratel, the company announced on Feb 26. The proceeds will be used to pay down debt.