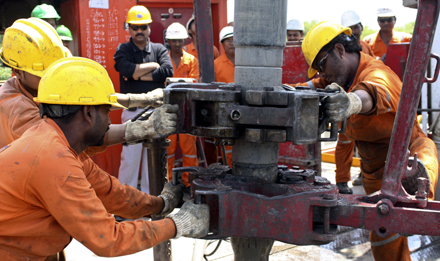 The Indian government plans to raise $2.5 billion by selling a 5 percent stake in Oil and Natural Gas Corp (ONGC). If the sale, the first to use a newly approved auction method, is a success it could help revive Delhi’s much-needed privatisation programme. Questions remain about retail participation and whether New Delhi is genuinely convinced by the merits of state sell-offs. But the disposal of shares in the state-controlled oil and gas company by auction is a new departure that promises to be effective and efficient.

In part, the ONGC sale reflects the government’s desperate need to raise cash before the budget, due on March 16. It is also a sign that equity market conditions, despite a slowing economy, are good enough to merit a sale of the family silver. The government pulled out of a planned public offer in September last year amid weak equity markets.

The auction is likely to attract institutions which are hungry for investment opportunities. True, a fixed-price offering might have been pitched at a discount, but the more market-sensitive auction method of price discovery should increase confidence in the valuation. Using this method, the deal can also be done quickly. And if the government can take advantage of market opportunities as they arise, there is greater hope that the state will further loosen its grip on key assets.

Retail participation is another bone of contention. Individual investors will find it harder to get involved in an auction. That’s a shame, since one of the primary objectives of India’s disinvestment programme was to deepen and broaden the capital market by bring in more retail investors.

India has never quite embraced the idea of privatisation, preferring to call it disinvestment. Last year’s budget set a $9 billion target for disinvestment by the end of March and so far only $250 million has been raised. New Delhi has also vowed to keep government stakes in any state-controlled firms above 50 percent. Yet real benefits come courtesy of the productivity gains that tend to follow increased private ownership. The auction tack is only one part of the equation. But it is one that bodes well for Indian privatisations.

Engineers of ONGC work inside the Kalol oil field in Gujarat.

New Delhi is set to raise at least $2.5 billion by selling a 5 percent stake in Oil and Natural Gas Corp (ONGC) on March 1. The long-delayed ONGC sale, set to be the biggest equity offering in India this year, will be done via an auction on the stock exchange, the first to use this newly approved sales method.
Shares in ONGC, the country’s largest oil and gas producer and second-largest listed firm in India by market value, rose as much as 4.8 percent on Feb. 29, outpacing the wider market, amid expectations that the offer would meet strong demand.
The floor price for the company’s share auction has been set at 290 rupees, the company said in a notice to stock exchanges, slightly higher than its closing price of 283.40 rupees on Feb. 28.
The government had earlier planned to sell ONGC shares through a public offer but that plan was scrapped last October after a tepid response from investors amid weak equity markets.